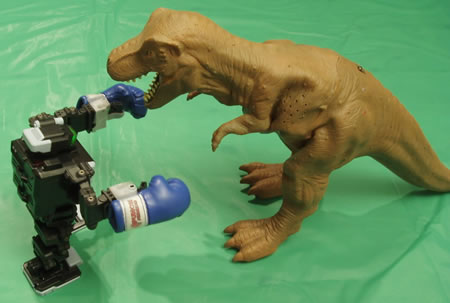 Video footage of i-SOBOT, the world’s smallest mass produced humanoid robot, in a no holds barred battle up against Godzilla:

While many celebrate the triumphant arrival of Takara/Tomy’s tiny humanoid robot upon American shores, a disturbing development comes with it. All across the USA, i-SOBOT fight clubs have been forming. These clubs have only one dark purpose; to pit hapless i-SOBOT robots against wild, primitive and aggressive creatures in caged death matches where the audience wagers on who will live and who will die! RobotsRule managed to get live video of one of those matches and several tragic photos too.

Check out i-SOBOT Fight Club: The Shocking Truth! for more pics and info.

Thanks to Robert Oschler at Robots Rule!

This official Tomy/Takara i-SOBOT video shows the tiny talented humanoid robot doing flips, talking, and gives a brief overview of several of its features: In other i-SOBOT news the official i-SOBOT web site now has some of the Japanese web pages up; still waiting on […]

i-Sobot $299.99, the world’s smallest robot, is now available for pre-order. The tiny humanoid from Tomy, a Japanese toy merchandise company, is expected to start shipping in October. The i-SOBOT is fully functional and features 17 custom designed actuators and gyro-sensor that allow it to […]

This brand new video shows an i-SOBOT robot being controlled by arm gestures with the help of the Nintendo Wii controller and the Nunchaku attachment. At the heart of the video is the free Robodance 4 software. System requirements: Windows PC running Windows 2000 or […]