Fans of science are going to want this awesome Higgs Boson Watch on their wrist. Before the discovery, the Higgs boson was mostly just theoretical; but this watch is real and it will look good on you.

Unlike the Higgs boson which may have no spin, electric charge, or color change, this watch has some of those features. It features an imitation leather band and a spinning second hand that spirals around. The image shows the Higgs decaying into other bosons during a collision. 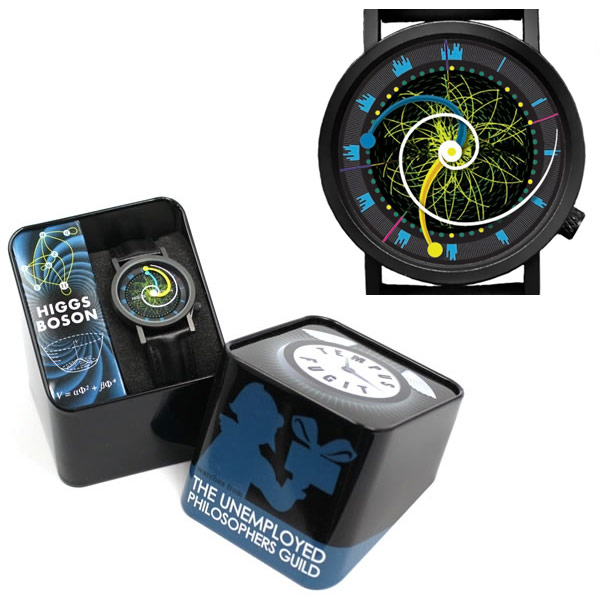 Do you love using all your fancy electronics like your Blu-Ray/DVD/CD players, gaming consoles, and wide screen HDTV, but feel they come up a little short in the audio department? NuForce, a leader in professional and consumer audio solutions, just announced the release of its […]

If you want tips on how to be sexy, a good way to learn is to observe Mexican women. They are born with the sexy gene, and somehow one of Mexico’s well-known traditional holidays, El Dia de los Muertos (The Day of the Dead), has […]

There are many LED watches out there, such as the Crazy Hour Watch, Sauron Watch, Cryogen Watch, and Light Speed Watch. This Blue LED Digital Watch is different than most in that it features a leather band instead of using rubber, plastic or metal. It […]

We love cool watches here at GeekAlerts. While the crazy Japanese LED Watches are a lot of fun, my personal favorites are the complex analog watches like the Devon Tread Watch and Diesel SBA Watch. So this new Oakley Minute Machine Unobtainium Strap Watch fits my […]

A collection of comical t-shirts is a great way to put a smile on your face and those lucky enough to be in your vicinity when you’re wearing them. The One of Two Most Elusive Things in the Universe Found T-Shirt should go nicely with […]

Are you looking for a watch that will help you stand out from the crowd? Well, Tokyoflash has just what you need. Designed to replicate the appearance of the “Rorschach inkblot test”, the Kisai Rorschach Watch is the first watch from Tokyoflash Japan to use […]

To add to the long list of LED watches available (do the Blue LED Watch, Crazy Hour Watch, Sauron Watch, Cryogen Watch, and Light Speed Watch ring a bell?), meet the TokyoFlash RPM Acetate Watch in a crisp, white color. Yes, the face of the watch does look a tad […]