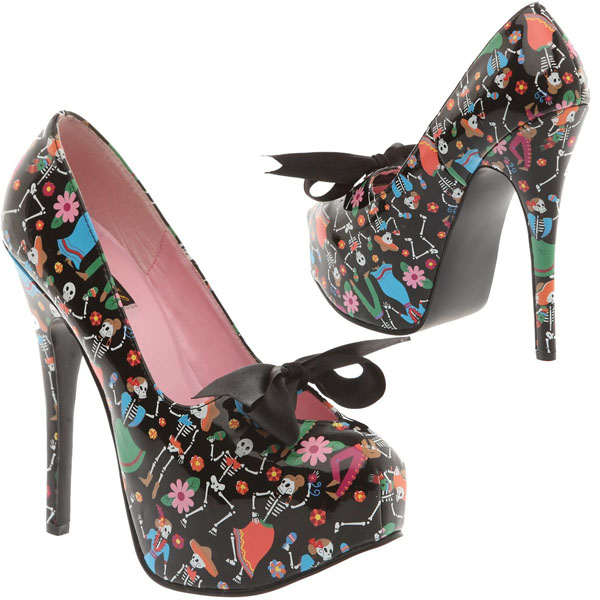 If you want tips on how to be sexy, a good way to learn is to observe Mexican women. They are born with the sexy gene, and somehow one of Mexico’s well-known traditional holidays, El Dia de los Muertos (The Day of the Dead), has found also its path to sexiness. Take a look at this pair of ultra-feminine yet ultra-hip Dia De Los Muertos Bow Platform Heels.

The holiday is typically observed on November 1 and 2. But since you’ll want to have plenty of opportunities to wear the heels, slip them on any time during the pre-Halloween season. In our book, the season starts now.

With a six-inch heel, you will gain lots of height to show off your dancing queen legs. But since your toes sit on a generous two-inch platform, your foot won’ have such a steep arch to overcome, which could equate to longer hours up on your salsa-dancing feet. 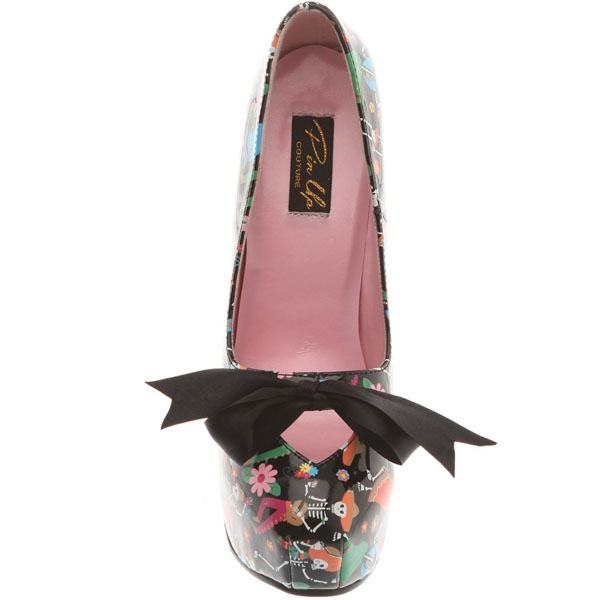 The front satin bow above the keyhole opening are details that are as sweet as sugar skulls. It looks as though the hole is positioned just high enough to avoid toe cleavage; not that there’s anything wrong with toe cleavage. The colorful florals/dancing skeletons print really makes these shoes scream “Ay caramba!”

Order your pair of Dia De Los Muertos Bow Platform Heels in sizes 6B-10B for $64.99 at Amazon.com and Hot Topic.

If you love these shoes, you might also love Day of the Dead Leggings.

Most men would agree that women look good in high heels. I think most of us would also agree that cake is extremely tasty and we would like to have it after almost every meal. Well, now you can combine these two passions into one […]

Do you love using all your fancy electronics like your Blu-Ray/DVD/CD players, gaming consoles, and wide screen HDTV, but feel they come up a little short in the audio department? NuForce, a leader in professional and consumer audio solutions, just announced the release of its […]

Every once in a while it’s good to revamp and refresh… out with the old, in with the new. If you’re sexy and you know it, then you need a sexy stocking for the holidays to match your personality, like any of these High Heel […]

When it comes to shoes, geeky girls don’t mind going all out every now and then. The more bells and whistles on a shoe, the better. For example, GA has recently shown you some wild Steampunk platforms with remote control LED lights and Killer heels with spikes and […]

The Wonder Go-Go Woman 3-Inch Heel Boots were made for walking… and for fighting the forces of evil. Whether you’re looking to cosplay or you just want to unleash your inner Amazon on the dance floor, these red and white patent leather boots will let […]

Chuck Bass from Gossip Girl made bow ties sort of “in” again. Before the show came along, most people considered them to be vintage and old-fashioned. And in a further bid to bring bow ties into the current scene is Nicholas Tee with his Modern Bow […]