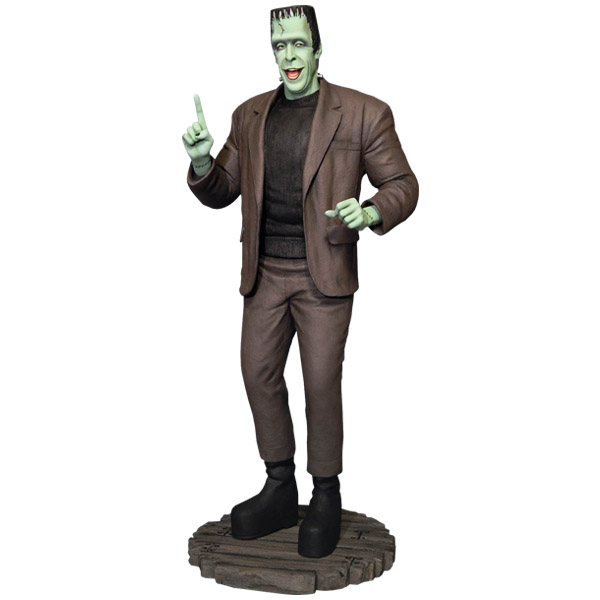 That lovable blockhead from Mockingbird Lane is ready to come home with you as the Herman Munster Maquette kicks off a line of collectibles that are sure to thrill fans of the classic 1960s TV series, The Munsters.

Herman might not be the brightest bulb in the box but at least his heart is in the right place (He should probably thank Grandpa for that). The highly-detailed statue stands an eye-catching 15-inches tall and features the big goof in a classic pose that usually means he’s either putting his foot down (good luck with that) or sharing his unique wisdom with others.

Of course, Herman wouldn’t the man he is today without his family to love and support him so the rest of the household – Lily, Grandpa, Eddie and Marilyn – will be added to the collection in the near future, along with a few other, lesser known, characters such as Cousin Lester, Uncle Gilbert, and TV horror host Zombo.

The Herman Munster Maquette will be available April 2014 but it can be pre-ordered now for $224.99 (or for as little as $56.25/month) at Sideshow Collectibles.

The Munsters Eddie Munster Maquette features a perfectly ordinary kid watching his favorite television show with his favorite stuffed toy. At least he’s perfectly normal in the world of the Munsters, where normal is incredibly loose since Dad is Frankenstein’s monster and both Mom and […]

Is it the deathly pallor of her skin, that shocking strip of white running through otherwise black hair, or the fact that her father is a thousand-year-old vampire that makes Mrs. Munster so alluring? The Lily Munster Maquette captures all the sexy qualities that turned […]

Does your Herman Munster statue and Lily Munster statue seem a little out of place with your decor? The Munsters Nevermore Maquette will make them feel right at home. Designed by Tweeterhead, the same creative folks who brought us Herman and Lily, this 15-inch-tall, pre-painted […]

Unleash your inner undead style and follow in the footsteps of Dracula’s daughter with the Rock Rebel The Munsters Lily Bat Bag. Like your horror with a little humor? Then you must be a fan of The Munsters because nobody can resist the vintage humor […]

No need to move to 1313 Mockingbird Lane because the Munsters Pop! Vinyl Figures let you bring the misfit monsters to your home address. The popular show aired from 1964 to 1966, but just like their characters, you can’t kill a good show forever and […]

When you’re talking large and in charge, you’re talking about the shiny, walking weapon from the movie, “Thor,” that’s depicted with the Thor Destroyer Maquette. This bad boy has gone toe to toe with the Thunder God himself and managed to show ol’ Goldilocks he […]

The Caped Crusader on the Classic Batman Maquette rocks the style of the 1940s and 1950s, before the Dark Knight returned, and even before the Batusi became a thing. Sculpted by Mike Cusanelli and painted by David Fisher, this 14 1/2-inch tall statue features a […]

Va-va-voom. This is one sexy animated Maquette. Fans of Who framed Roger Rabbit are already huge Jessica rabbit fans, and the rest of you who just saw this Disney Trail Mix-Up Jessica Rabbit Mini Maquette for the first time are now instant fans as well. […]