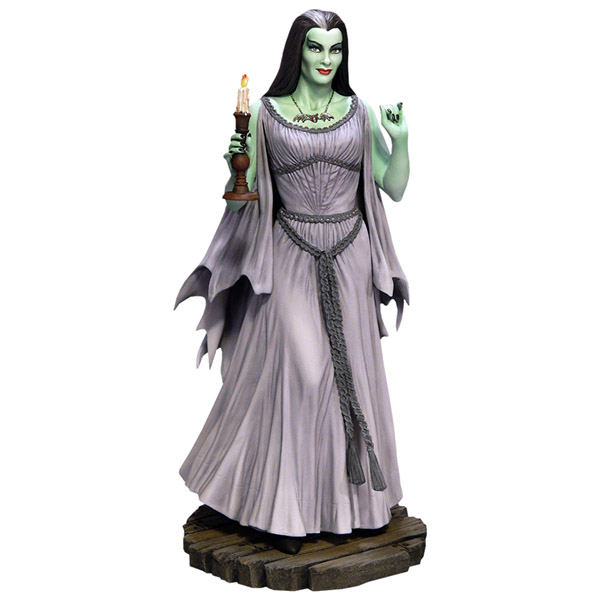 Is it the deathly pallor of her skin, that shocking strip of white running through otherwise black hair, or the fact that her father is a thousand-year-old vampire that makes Mrs. Munster so alluring? The Lily Munster Maquette captures all the sexy qualities that turned Herman’s brain to swiss cheese when she was around. Okay, Herman was never the brightest bulb in the lamp but he had something going for him to make Lily say yes when he proposed.

The devilishly divine matriarch of 1313 Mockingbird Lane comes with her iconic purple dress, black fingernails, and Swarovski-adorned bat necklace… and of course it’s possible to pair her with the love of her life because Herman has his own maquette.

The Munsters Eddie Munster Maquette features a perfectly ordinary kid watching his favorite television show with his favorite stuffed toy. At least he’s perfectly normal in the world of the Munsters, where normal is incredibly loose since Dad is Frankenstein’s monster and both Mom and […]

That lovable blockhead from Mockingbird Lane is ready to come home with you as the Herman Munster Maquette kicks off a line of collectibles that are sure to thrill fans of the classic 1960s TV series, The Munsters. Herman might not be the brightest bulb […]

Does your Herman Munster statue and Lily Munster statue seem a little out of place with your decor? The Munsters Nevermore Maquette will make them feel right at home. Designed by Tweeterhead, the same creative folks who brought us Herman and Lily, this 15-inch-tall, pre-painted […]

Unleash your inner undead style and follow in the footsteps of Dracula’s daughter with the Rock Rebel The Munsters Lily Bat Bag. Like your horror with a little humor? Then you must be a fan of The Munsters because nobody can resist the vintage humor […]

No need to move to 1313 Mockingbird Lane because the Munsters Pop! Vinyl Figures let you bring the misfit monsters to your home address. The popular show aired from 1964 to 1966, but just like their characters, you can’t kill a good show forever and […]

The bird on the Parrot Swarovski Crystal iPhone 4 and 4S Case can’t say if you had a cracker, but it will make your iPhone 4 or iPhone 4S bling out. The case is assembled by hand and is adorned with over a thousand Swarovski […]

The Solar Eclipse Black Swarovski Crystal in Pewter Necklace is timeless and beautiful. It has a silver-plated solar eclipse charm with a black Swarovski crystal. Now you can experience a solar eclipse everyday. The length adjusts from 16″ – 20″. It will be a great […]