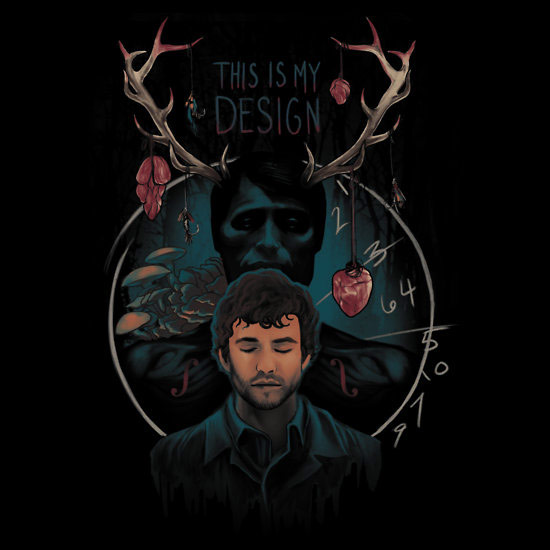 Let everyone know exactly what kind of appetite you have with the Hannibal This Is My Design T-Shirt because those in the know might think twice about being rude to you.

Hannibal might not be known as the cannibal just yet but we’ve already seen evidence in the show that rudeness rubs him the wrong way in a big way. Meanwhile, poor Will Graham is just trying to keep his brain from melting inside his skull.

The black American Apparel t-shirt features decent likenesses of Hugh Dancy and Mads Mikkelsen, who portray Will Graham and Hannibal Lecter on the NBC TV series. The imagery also includes the iconic antlers that kept popping up during the first season, a distorted clock as drawn by Will, and Will’s “This is my design” mantra that he uses when getting inside a killer’s head. 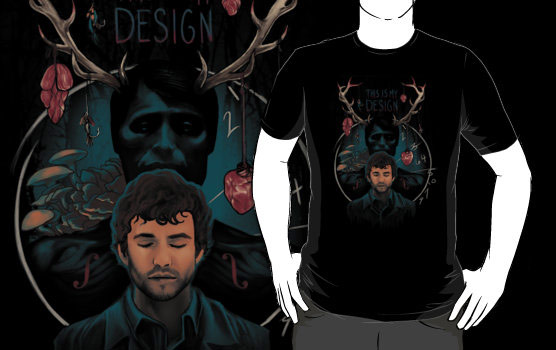 The Hannibal This Is My Design T-Shirt is available for $25.97 at RedBubble.com.

The Doctor Hannibal Lecter Sixth-Scale Action Figure wants to have you over for dinner. Mads Mikkelsen’s Hannibal Lecter doesn’t really like rude people but he knows how to make them more appealing with the right herbs and spices. Based on Mikkelsen’s appetizing portrayal of Hannibal […]

Hannibal the Cannibal is ready to be wheeled into your horror collection with the Hannibal Lecter (Straitjacket Version) Sixth-Scale Figure. In The Silence of the Lambs, Hannibal Lecter, wonderfully brought to life by Anthony Hopkins, doesn’t seem terribly dangerous; just a brilliant old man who […]

Don’t be rude, or else you might wind up on the dinner plate of the Hannibal Lecter (White Prison Uniform) Version Sixth-Scale Figure. In less than twenty minutes, Anthony Hopkins introduced the world to one of the creepiest and coolest bad guys to ever appear […]

So you’ve encountered someone rude and want to have them over for dinner. No problem because Feeding Hannibal: A Connoisseur’s Cookbook will make sure you’re able to create a truly exquisite meal. Sadly, this 240-page hardcover cookbook won’t tell you how to turn that rude […]

Get ready to bring out the fava beans and a nice chianti because the Silence of the Lambs Hannibal Lecter Pop! Vinyl Figure is ready to join you for dinner. Standing 3 3/4-inches tall, Anthony Hopkins’ Hannibal Lecter is an intimidating sight, strapped to a […]

Oh, go fly a kite! Don’t mind if I do, but first I’ve got to paint it. If you’ve been holding back on buying a kite because you can’t find the perfect one that best represents your personality, maybe it’s time you design one for yourself. To […]