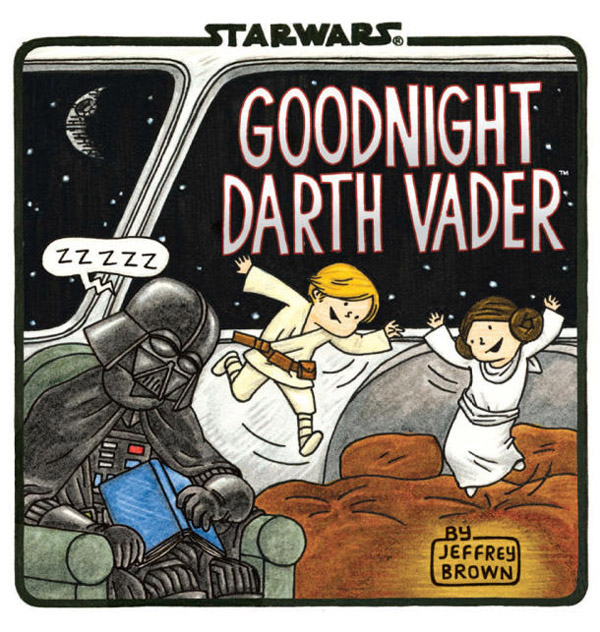 A long time ago, in a galaxy far, far away, the Dark Lord of the Sith tried to get his two kids to go to bed by reading them a bedtime story. The Goodnight Darth Vader HC Book shows that author Jeffrey Brown is at it again, offering us a very different view of how things might have happened if Vader had been allowed to raise his kids.

The man who brought us Darth Vader and Son and Vader’s Little Princess delivers a story where, once again, Luke and Leia, triumph over the masked one as they demand a bedtime story before drifting off into Dreamland. While Vader reads, trying to keep from falling asleep himself, we get to see a few familiar faces (Yoda, R2-D2, Han Solo, Chewbacca, Darth Maul, Admiral Ackbar, Boba Fett, and many others) as they snuggle in for the night.

Do you remember Goodnight Moon, the classic book written by Margaret Wise Brown in 1947? I’m sure many of you had it read to you when you were kids or may have even read it to your own children; but don’t you think it is […]

Goodnight Moon goes MAD for the Dark Knight with the Batman Goodnight Batcave Book. Inspired by Goodnight Moon, this “100% unauthorized parody” gives the classic children’s picture book a Batman twist that’s sure to help send your little Caped Crusader off to Snoozeville. The 32-page […]