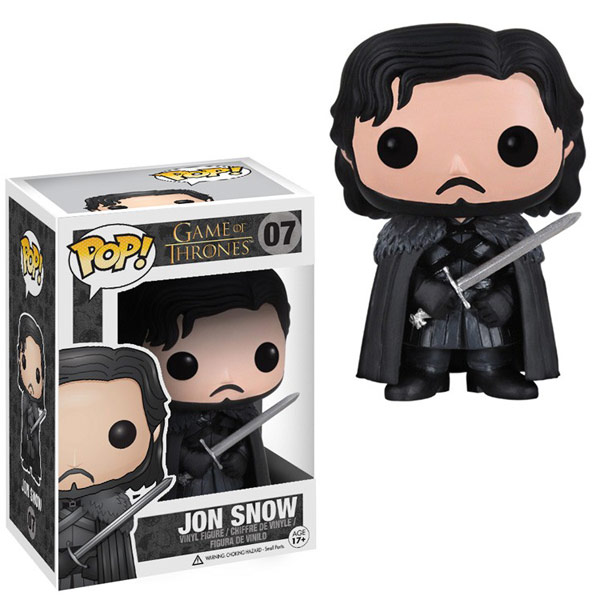 Whose rear will warm the Iron Throne in the end? The choices are many but it’s probably safe to assume the Game of Thrones Jon Snow Pop! Vinyl Figure isn’t in the running for the royal tushy station, but at least Snow is earning plenty of nicknames on HBO’s Game of Thrones.

Whether you want to call him Crow, Bastard of Winterfell, or a member of the Night’s Watch, Eddard Stark’s son makes a dashing figure as a 3 3/4-inch tall Pop! character. Doesn’t he look intimidating with his Night’s Watch cloak and sword?

Hmmm. Okay, maybe intimidating isn’t the right word, but he’s still sure to thrill GoT fans.

The Game of Thrones Jon Snow Pop! Vinyl Figure is available for $9.99 at Entertainment Earth and Newegg.com and for $about $11 at Amazon.com.

Winter is coming because Tormund Giantsbane is ready to Netflix and Chill, and the Pop! Vinyl Game Of Thrones Tormund Giantsbane Figure is so cute that his crush, Brienne of Tarth, might actually be agreeable with that plan. The red-headed fury of the wildlings was […]

Look cool, while you stay warm, with this Game of Thrones Jon Snow Fur Hoodie. While this awesome jacket is detailed enough to serve for GoT cosplay, it is stylish and subtle enough to wear as your daily winter jacket. It features a faux fur-lined […]

Check out Jon Snow’s Wallet. It is a bifold wallet that features the hilt of Longclaw on the outside and the GoT logo on the inside. It has room for all of your things with four card slots, two sideways pockets, and one billholder. Jon […]