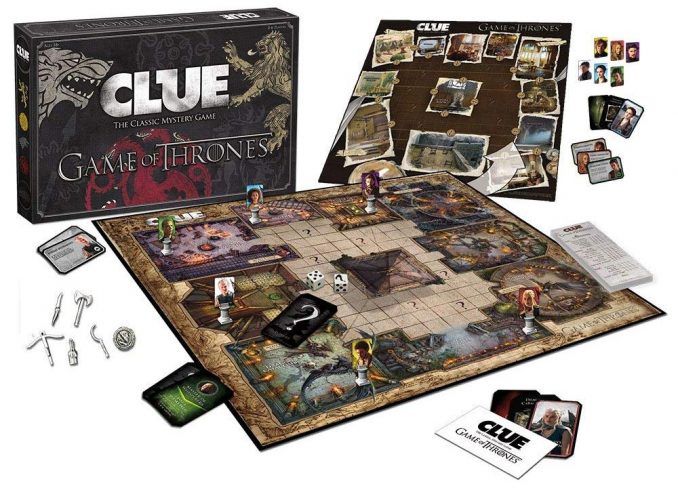 It’s time to journey to Westeros with Game of Thrones Clue, so you should expect to be busy for a while because there’s always plenty of murder going on when one covets the Iron Throne.

In addition, the game also comes with 21 Intrigue Cards, including 13 Master of Whisperers and 8 White Walkers, and the board is two-sided, letting the action take place in either The Red Keep or Meereen.

High treachery and betrayal are behind the two mysteries to solve in Game of Thrones Clue. Featuring a double-sided game board, players choose to solve the murder mystery in The Red Keep or in Meereen. WHO was responsible for plotting the murder? WHAT weapon was used and WHERE did the crime take place? This game includes:

Game of Thrones Clue is available for $49.95 direct from HBO Shop. You can also find it at BoxLunch, Amazon, and Entertainment Earth.

When you take one of the best classic board games and transform it using the characters, setting, and theme of one of your current favorite movies, TV shows, or comic books, it makes it so much better. For example, take Deadpool Collector’s Edition Monopoly, Rick […]

They already have Bob’s Burgers Monopoly and Jenga, and now you can get the Bob’s Burgers Clue Game. In this game, players (it’s designed for 3 to 6 players) work to solve the mystery of WHO killed “Ned Boddy.” They also have to figure out […]