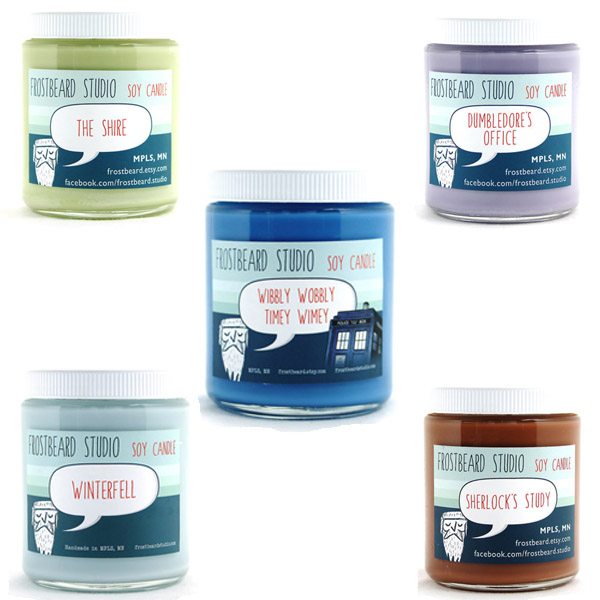 Does your nose know geek when it smells it? Frostbeard’s Geeky Candles provide an aroma for many geeky places, letting you finally know what certain fandoms actually smell like.

You’ve read about many fantastical places, and you’ve seen many given physical form in television shows and movies, but you’ve never been able to get an idea of how those places smell… until now.

Of course, it’s probably easy to figure out Game of Thrones’ Winterfell smells like Scotch pine and firewood, while Sherlock’s Study allows you to breathe in Sweet pipe tobacco, cherry wood and fresh rain.

However, did you know the TARDIS smells like Driftwood, Black Currant Tea, and hint of Juniper? Sounds about right to me.

Keep in mind that one person’s bouquet of roses might be another person’s pile of poo so some of these candles might not match the smells you have in your head when you think of your favorite geeky places.

Birthdays are the best. The promise of cake is always a biggie, but celebrating someone’s entire life and watching them blow out their candles to make a wish ranks pretty high up there, too. Since birthdays only come once a year, why not go all out and top the […]

These are the candles that you should light up when you literally feel like exploding. The Kaboom Candles are bomb-shaped black candles with the word “Kaboom” printed all across it boldly in white. Light one up (but definitely don’t throw it at the person you […]

Candles have always been more for the ladies. That’s why they have pleasant scents and pretty colors. Most men don’t care to use candles, but those that do have never had a manly alternative to use. Well, Man Candles are candles just for men. They […]

Keep this Box of Chocolate Candles away from people who can’t stay away from sweets because they’ll end up with more than just an upset stomach if they happen to stuff one of these decadent-looking treats down their mouths.

We’ve seen LED candles before, but never like this. The LED Blow On-Off Candles ($7.99 – $9.99, depending on quantity) comes with a magic feature.

Birthdays are always fun and everyone enjoys getting cool stuff.  This time around stick the Blotz Party Candles on the cake to give the birthday boy or girl a little something extra.  LEGO and building block fans will really appreciate this, especially if they’re any […]

Hey guys (and gals), are you sick of all the foo foo candles and air fresheners out there? Do you want something that smells nice while maintaining the ambiance of your geekishly cool home? The Mandles (Beer Bottle Candles) are the perfect candles for anyone […]