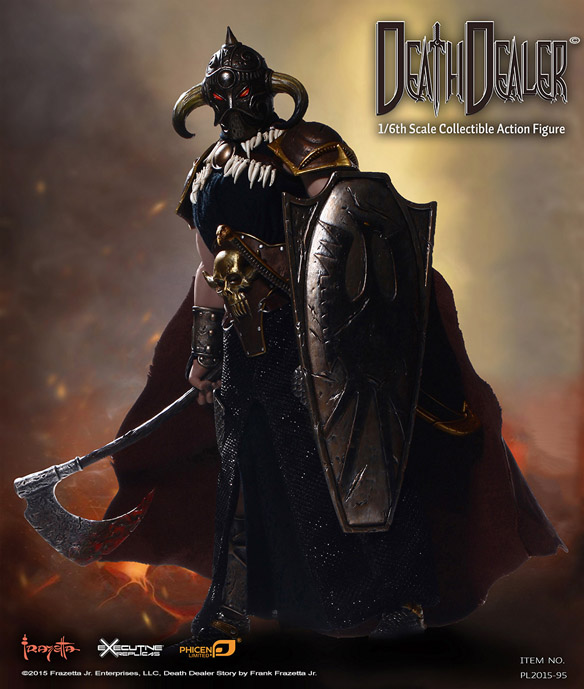 You can’t play with the awesome art but you can play with Frank Frazetta’s Death Dealer Action Figure.

Created in 1973, fantasy art god Frank Frazetta created the Death Dealer, a menacing, muscled figure wearing a horned helmet sitting upon his mighty black steed. Frazetta created many awesome images through the course of his life but Death Dealer became a fantasy icon, spawning more paintings featuring the character, along with novels, comic books, D & D adventures, and statues. Now this horned master of death and destruction is available as a 1:6 scale action figure.

Sadly, the mighty black steed isn’t included but the action figure does come with a ton of other goodies, including:

Frank Frazetta’s Death Dealer Action Figure will be available August 2016 but it can be pre-ordered now for $189.99 at Entertainment Earth.

Take a seat, Conan, because you look kinda lame next to the Frank Frazetta Death Dealer 1:4 Scale Statue. Fantasy artist Frank Frazetta created many eye-popping images filled with interesting characters and the mighty Death Dealer has to be one of the most popular. Based […]

The dealer of death pays his respects with the Frazetta Tribute Death Dealer Statue. Frank Frazetta created many eye-catching and iconic characters but the one that comes to mind first for many fans is the fierce Death Dealer, sitting astride his giant black horse, his […]

The bronze might not be real but the awesomeness is with the Death Dealer Faux Bronze Statue. Standing approximately 14-inches tall with a faux finished marble base that is 7-inches wide and 5-inches deep, this officially-licensed and highly-detailed statue features an eye-catching look at Frank […]

In the classic movie “A Christmas Story,” the young boy Ralphie has quite a few low moments, such as being forced to sport the pink bunny suit, the ‘oh fudge’ bar soap treatment, and being told that he’ll shoot his eye out every time he talks about the Red Ryder BB gun. At one […]

I watched this creepy, sci-fi movie late last night where mutant cockroaches would crawl up your back and creep into your ears to eat your brain. (No, I’m not kidding, people actually thought up scripts like these and other people actually coughed up the money […]

Christmas time is upon us and that means it’s time to pull out the tree, the lights, and everything related to the infamous leg lamp in A Christmas Story, including the Christmas Story Leg Lamp Mug. There are thousands of holiday traditions out there but […]

You might have noticed a lot of leggy items lately being featured on GeekAlerts. No, it’s not because leg-themed stuff are suddenly high in demand right now. But if you’ve seen that movie from the 1980s, A Christmas Story, then you’ll understand why. Joining the list […]

Fantasy art soars from the canvas to become a statue with the Dark Elf Statue by Luis Royo. Designed by the fantasy artist himself, the Dark Elf stands 20-inches tall, ready for battle even as she wipes blood away. Based on the winged warrior of […]