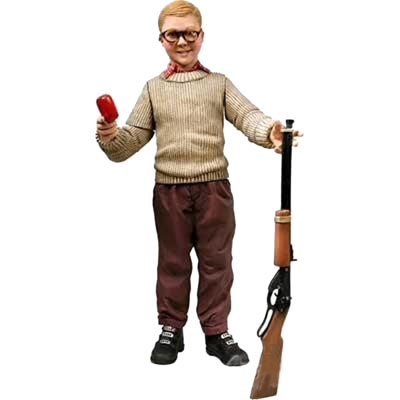 In the classic movie “A Christmas Story,” the young boy Ralphie has quite a few low moments, such as being forced to sport the pink bunny suit, the ‘oh fudge’ bar soap treatment, and being told that he’ll shoot his eye out every time he talks about the Red Ryder BB gun. At one point, the heavens shine down on him on Christmas Day when he unwraps the rifle of his dreams.

The Ralphie BB Gun Action Figure closely captures Ralphie’s triumph and elation from that day. He is seen holding a shot gun in one hand and bar of soap in the other. Having this figurine symbolizes the life lesson that sometimes you win and sometimes you lose, but you don’t really live unless you take some bold risks.

This 7″ Christmas Story Ralphie Action Figure might just shoot your eye out! Including a Red Ryder BB gun and a bar of soap, this action figure brings home a piece of A Christmas Story yearly tradition.

I’m not sure if this figure was hand-crafted, but the intricate detailing from the grain of his sweater, to his rosy cheeks and circle specs, to the iconic objects he’s holding, are bang-on. The best thing about the figure is that he can be displayed all year round, even though we tend to think of him more during the holidays.

SuperHeroStuff.com has the Ralphie BB Gun Action Figure for $16.99. 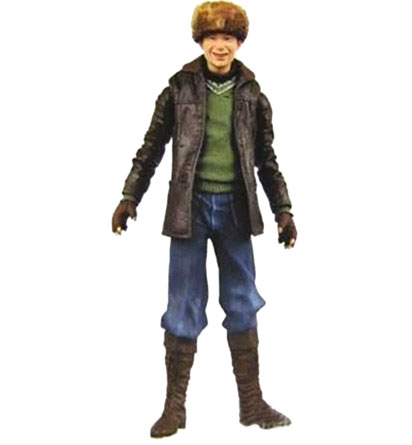 The store also sells the Scut Farkus Action Figure, Ralphie’s archenemy and reason for owning the BB gun, for the same price.

You might also be pleased to know that there is an array of leg lamp novelties, including A Christmas Story Leg Light Set, Leg Lamp Votive Candle Holder, Leg Lamp Cookie Cutter, Christmas Story Mug, and the functioning Leg Lamp itself.

Christmas time is upon us and that means it’s time to pull out the tree, the lights, and everything related to the infamous leg lamp in A Christmas Story, including the Christmas Story Leg Lamp Mug. There are thousands of holiday traditions out there but […]

You might have noticed a lot of leggy items lately being featured on GeekAlerts. No, it’s not because leg-themed stuff are suddenly high in demand right now. But if you’ve seen that movie from the 1980s, A Christmas Story, then you’ll understand why. Joining the list […]

This Christmas Story Ralphie Bunny Suit Bobble Head recreates the embarrassing moment from the classic movie when Ralphie had to try on the bunny suit. That was life in 1940s Indiana. To think, all Ralphie wanted for Christmas was a Red Ryder BB gun. Everyone […]

But is it “fra-gee-lay?” The iconic Leg Lamp from A Christmas Story gets a superhero twist with the DC Classic 20-Inch Batman Leg Lamp. So, that time-honored holiday classic about Ralphie and his quest for a Red Ryder BB gun gave birth to the burning […]

There were so many classic moments in the movie A Christmas Story and this is one of them. When Ralphie comes down the stairs in his pink bunny suit. This A Christmas Story Pink Bunny Ralphie Pop! Vinyl Figure is that moment. He stands 3 […]

GeekAlerts has shown you some great pint glasses over the last few months, The Beatles, Atari Arcade, DC Comics Heroes, and Marvel Comics, but we thought you might need something to get you in the mood for Christmas; so we found a classic that is […]

Do you know someone who deserves not just a lamp but a major award? Why not reward this honorable person with A Christmas Story Leg Lamp to “blaze in unparalleled glory”?  This lamp is a 20″ replica of the one featured in the classic film. […]

By now we all know about the Leg lamp from the movie “A Christmas Story”. And while we can’t all have a Leg Lamp of our own for the holidays, we can at least make some cookies in it’s honor with the A Christmas Story […]