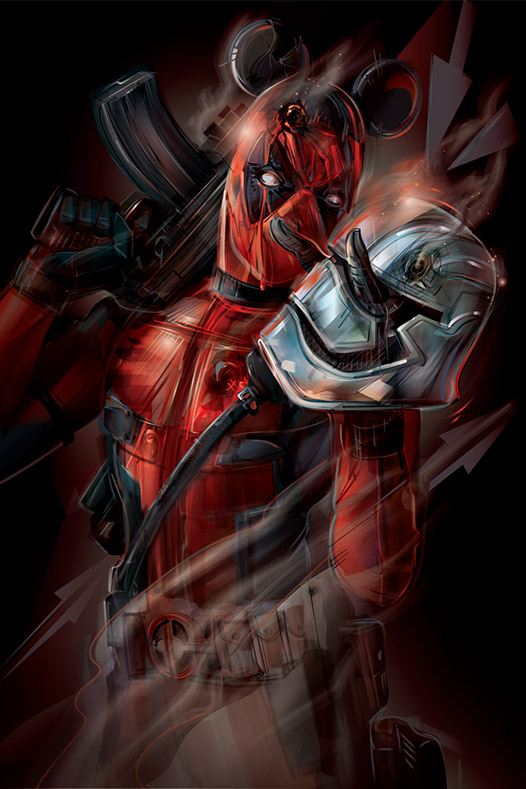 Marvel meets Disney with the Force Awakens Deadpool Art, and poor Captain Phasma pays the price. Deadpool doesn’t like to be awakened, not even by the Force.

Han and Finn dumped Captain Phasma down the garbage chute but artist Orlando Arocena reveals that Deadpool did something much worse to the chrome-covered stormtrooper on this eye-catching 18″ x 24″ print. It’s limited to just 50 prints so put down that chimichanga and get the thing already.

Love the mouse ears on the Merc with the Mouth, because nothing goes together like Deadpool and Disney. It’s sort of like that classic combo of peanut butter and pickles.

The Force Awakens Deadpool Art is available for $30 at Mexifunk Limited.

Hang on to your pepperoni and watch where you stick that salami because the Chimichanga Dude T-Shirt has merged a teenage mutant ninja turtle with Marvel Comics ‘Merc with a Mouth,’ Deadpool. It’s the mash-up that doesn’t make sense… until you think about it. After […]

It’s time to make the chimichangas with the Deadpool Merc with a Mouth Art Print, and Wade Wilson hopes they require some slicing and dicing because he’s getting his swords ready for action. Artist Rich Pellegrino created this awesome 11 x 14 print of everyone’s […]

Tell your waist exactly how it’s going to be with the Deadpool Merc with a Mouth Waist Cincher because nobody knows the benefits of having a slim waist like Deadpool. Using 14 plastic bones to shape your waist and a heavy four-prong busk down center […]

Awaken the Force of your inner child with the Star Wars: The Force Awakens ’25 Cent Wonders’ Art Prints. They’re basically lost to the past now but there was a time when parents could entertain their children while shopping by popping a quarter into a […]

For those who didn’t get enough Phasma action in The Force Awakens, Journey to Star Wars: The Last Jedi: Phasma is for you. We know she wears some sharp-looking armor that sets her apart from the other stormtroopers, and we know she sounds a lot […]