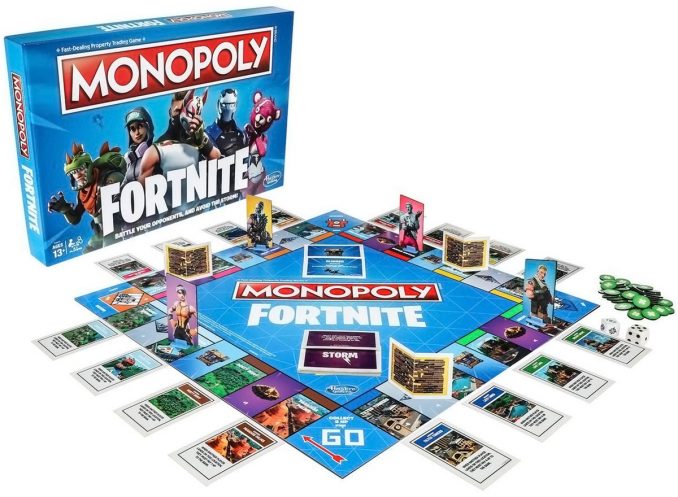 Just like in the video game, in the Fortnite Edition Monopoly Game, the last player standing wins. You also battle opponents, claim locations and avoid the Storm to survive. Instead of Monopoly money, players earn Health Points (HP).

In Fortnite Monopoly, you begin by choosing your character from 27 different skins. Roll the action die to see if you get to damage your opponents, build walls, or pick up health packs. When a player passes Go, they unleash the Storm, which must be avoided or you lose HP.

In this thrilling Fortnite edition of the Monopoly game, players claim locations, battle opponents, and avoid the Storm to survive. The gameplay, design, and components of the board game include elements inspired by the video game including Fortnite locations and loot chest cards. Instead of Monopoly money, players earn Health Points (HP).

First choose a character: pick from 27 awesome outfits. Then, it’s time to battle. The action die lets players pick up health packs, build walls, and damage their opponents. Every time a player passes go they unleash the Storm; avoid it or lose HP. Like in the Fortnite video game, the last player standing wins!

Fortnite Edition Monopoly is $19.99 at Entertainment Earth. It is in pre-orders now with shipments expected in October 2018.

Fortnite Season 4 is here, and Epic Games has released a Fortnite Season 4 Trailer to announce the update to everyone’s favorite battle royale video game. With the Season 4 Battle Pass there are 100 tiers of new rewards including sprays, emotes, and cosmetic items. […]

As part of the new V5.30 Content Update, Epic added Shockwave Grenades to Fortnite. As they tend to do when there is a cool new item, they create a fun video to introduce it. They have done that for shockwave grenades, just as they did […]