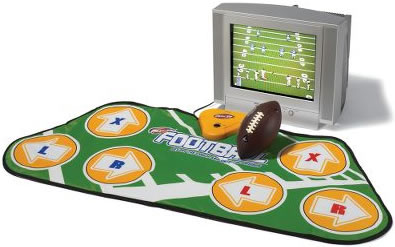 How about a Football Simulator ($60) to add to the golf, surfing and jet ski ones? Same idea; plug it directly into a television, and you’re away.

This interactive football video game system plugs directly into a television and translates players’ running movements to control game play, allowing two players to compete against each other or play on the same team. Players stand on the control pad and step on left and right direction indicators to avoid tacklers and collect power-ups such as invincibility, earthquake, speed, and more. The football-shaped game paddle controls play selection, executes hand-offs for running plays, and allows you to throw passes. Requires six AA batteries. Ages 8 and up. 20″ L x 20″ W.

(Via The Red Ferret Journal)

In times of crisis, there’s no time to spare. It’s best that you’re already prepared with all your supplies and emergency stuff so you can just grab everything and go. Once you’ve gotten all the equipment for the humans in place, it’s time to consider […]

If you’ve ever watched The Family Guy, you know that Stewie’s head is shaped just like a football. Finally someone has taken the initiative to create the Family Guy Stewie’s Head Football, so you can have the fun football you’ve always wanted. This soft foam […]

Football fans will be immersed in the game with this 28″ HANNspree Football LCD TV as they watch football on a… football. It not only is shaped like a football, but it has a genuine football-leather finish too. That’s not the only great feature. It […]

Check this out football fans. You know you have to get this awesome Gridiron Challenge Football Bounce House for your kids. This is a heavy duty commercial grade bouncer made of heavy duty 18 oz material. Plus it has a giant helmet in front. You […]

This Star Wars R2D2 Mini-Football is amazing. I have seen the little droid in many forms when it comes to merchandise, but this is the first time I’ve seen an R2-D2 football. It appeals to my inner geek. It’s as if the droid were crushed […]

The weather will be getting warmer soon for many of us, so it is almost time to get outside and start throwing the ball around. This Adventure Time 8-Inch Jake Football is perfect. Jake has morphed himself into a Football for your amusement. Now you […]

Football fan or not, it really doesn’t matter – this 51cm (20 inches) tall football stadium floodlights desktop replica will look great in just about any home. It features a shiny chrome finish and the six spotlights can be tilted up and down. Football Stadium […]