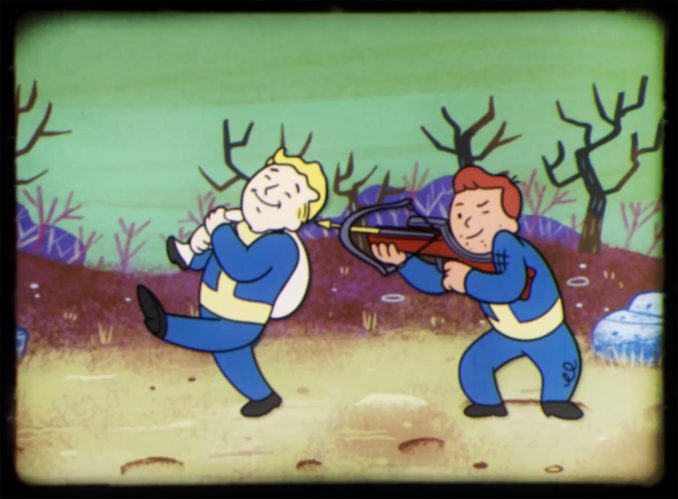 Bethesda has been continually releasing Vault-Tec Presents videos to promote Fallout 76. Each introduces an important gameplay element and is done as a humorous cartoon in the style of old-fashioned government public information films. The latest was released today: Fallout 76 – Vault-Tec Presents: A New American Dream Video, and it covers crafting and building using C.A.M.P.s – Construction and Assembly Mobile Platform.

You Will Emerge! Brought to you by the Vault-Tec American Tricentennial Committee. Today’s episode, “A New American Dream: Laying the Cornerstones”.

After thermonuclear war, Man’s towering industrial marvels may no longer stretch to the heavens. It’s up to YOU to rebuild America with C.A.M.P.s – Construction and Assembly Mobile Platform.

Fallout 76 – Vault-Tec Presents: Being a Better You! Perks Video

Fallout 76 – Vault-Tec Presents: Being a Better You! Perks is a fun video in the style of old-fashioned workplace training films. Its goal is to introduce Fallout 76’s Perk system, which allows you to customize your character with a new card-based system, to be […]

This Fallout Vault-Tec Sublimated Sherpa Blanket will keep you warm whether you are in the vault or out in the wasteland. The Vault-Tec logo is right on front of this polyester blanket featuring the in-game billboard graphic. It measures 45″ by 60″. Stay warm while […]

You’ll need this Fallout Vault Tec 111 Armored Backpack if you plan to spend any time at all roaming around a post apocalyptic environment. It will carry all of your important stuff that you find along the way. This backpack was designed from the Vault […]