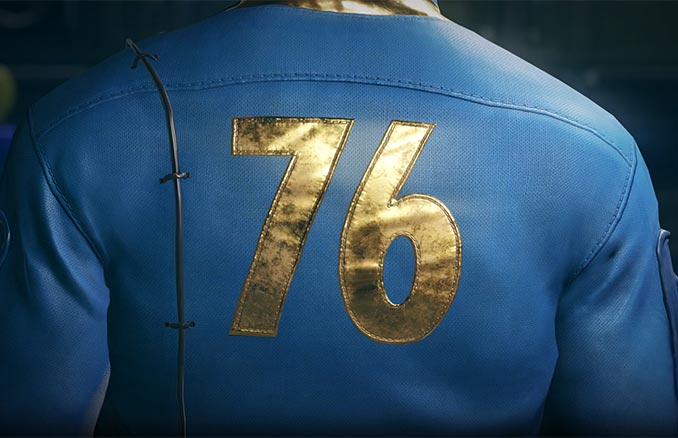 Today, Bethesda Game Studios announced a brand new Fallout game and released the Fallout 76 Official Teaser Trailer. Besides for the teaser trailer, Bethesda did not offer much more information about Fallout 76 other to say that more would be unveiled at E3 during the Bethesda Showcase on June 10, 2018.

Over at Kotaku, Jason Schreier reports that Fallout 76 will be completely different than the previous games in the series, and will be an online multiplayer survival RPG. “It will have quests and a story, like any other game from Bethesda Game Studios, a developer known for meaty RPGs like Skyrim. It will also feature base-building—just like 2015’s Fallout 4—and other survival-based and multiplayer mechanics, according to those sources.”

Bethesda Game Studios, the award-winning creators of The Elder Scrolls V: Skyrim and Fallout 4, welcome you to Fallout 76. Watch the official teaser trailer for Fallout 76, and see more during this year’s Bethesda E3 Showcase, happening on June 10 at 6:30pm PT in Los Angeles, CA, or live on Twitch, YouTube, Twitter, Facebook or over at Bethesda.net.

The Skyrim Shout 1000pc Puzzle features the Dragonborn. A Dovahkiin is looking to the sky and using the Thu’um. This puzzle is not only a fun challenge, but when it all comes together you have a beautiful image from one of your favorite games. This […]

This Skyrim Imperial Seal Blanket features the Seal of Akatosh, the symbol of the Imperial Legion. It is the version of the symbol with the wing broken off. It will keep you warm while you dream of fighting dragons. It gets cold in Winterhold and […]

Tom Cruise is back as Ethan Hunt in Mission: Impossible – Fallout and a few new faces are added to his IMF team. Henry Cavill (Superman, Man from U.N.C.L.E.) stars as August Walker, Michelle Monaghan as Julia Meade and Simon Pegg and Ving Rhames return […]