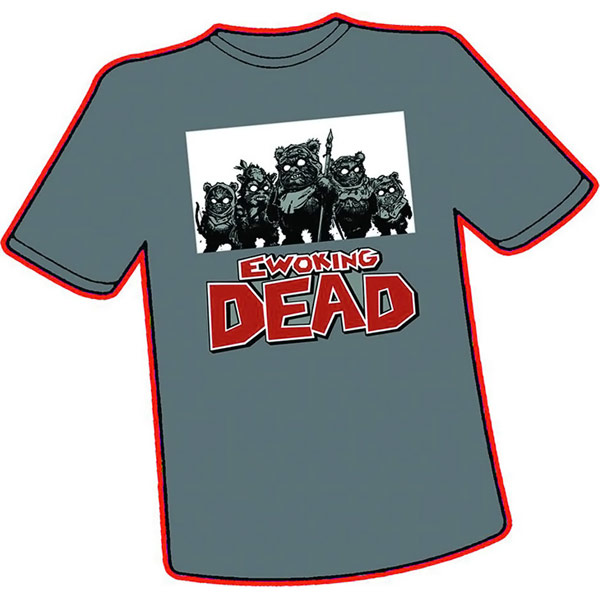 Star Wars and The Walking Dead merge for the mash-up you never saw coming with the Ewoking Dead T-Shirt; featuring cute and cuddly little teddy bears that want to eat your face off.

Return of the Jedi was a great wrap-up to the first Star Wars trilogy, introducing us to the forest-dwelling Ewoks, but how much more awesome would the movie have been if the rebels and Imperial forces landed their after the planet had suffered a zombie apocalypse? If the film had been made during the current zombie-loving times, I have no doubt this is the path the story would’ve taken.

Alas, the trilogy didn’t end that way so this t-shirt is the only way to enjoy what could’ve been.

The Ewoking Dead T-Shirt will be available July 2013, but it can pre-ordered now for $19.09 at Urban Collector.

If you haven’t spent the time, or don’t have the time, to read the Zombie Survival Guide, then you need the next best thing. The Shaun of the Dead Zombie Attack Survival Kit Girls T-Shirt is the Cliff Notes of zombie survival and will help […]

Even if the world ends and the dead start craving living flesh, that’s no reason to let fashion slide so wear the Zombie Apocalypse Hawaiian Shirt to look your best as you try to avoid becoming a midnight snack. Unlike the zombies on The Walking […]