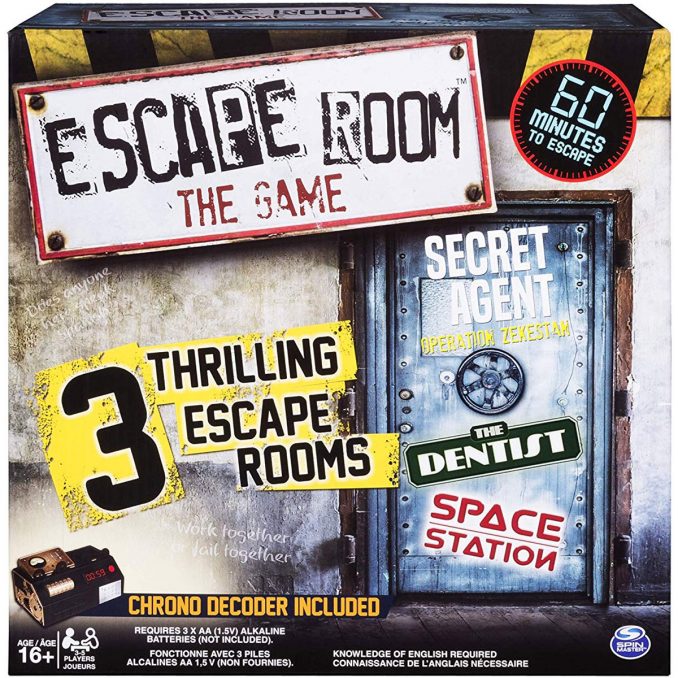 Escape rooms have become a very popular pastime in the United States and around the room. However, you no longer need to go out to have an exciting adventure with your friends, as you can now do it at home with Escape Room The Game from Spin Master.

There are actually 3 thrilling escape rooms included with varying degrees of difficulty, so you can play with newbies or masters. You and your team of 3 to 5 players race against the clock as the Chrono Decoder counts down from 60 minutes as you find clues, solve puzzles, and work to find your way out in one of three scenarios: Secret Agent, Space Station, or The Dentist.

Can you keep your cool under pressure? Escape Room The Game from Spin Master brings the thrill and mystery of an escape room to your home. There’s a way out of each seemingly impossible scenario – it’s up to you and your team of three to five players to figure it out in time. Solve puzzles, find clues, and work together to find a way out of the room before the clock runs out! The Chrono Decoder counts down from 60 minutes and creates a real escape room atmosphere.

Play one of three different exciting escape room adventures with varying levels of difficulty: Secret Agent, The Dentist, and Space Station. You win or lose together with Escape Room The Game.

Escape Room The Game is $29.99 at Target. You can also find it at Walmart and Amazon.

Escape the Room – Mystery at the Stargazer’s Manor

Escape the Room – Mystery at the Stargazer’s Manor is the perfect game for a fun night in with family and friends. But you will have to flex your brain muscles to unlock clues and solve puzzles. It it up to you and your fellow […]

Santiago Cantera, a designer from Cordoba, Argentina, has come up with the idea for this cool and geeky looking keyboard inspired digital alarm clock.

The Secret Agent Hand Sanitizer, despite what you might expect, doesn’t explode.  It also doesn’t attract females, since you’re not actually a spy.  And, if you were a spy and you were any good at it, the girls wouldn’t know that you were a secret […]