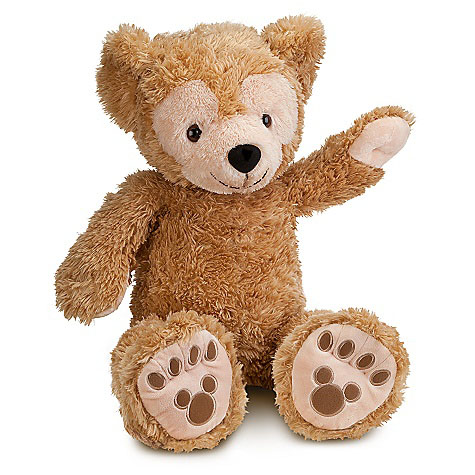 Do you like Walt Disney but have something against mice wearing big, white gloves? Duffy the Disney Bear sounds like the answer for you.

Duffy is a unique Disney character because you won’t find him in any Disney movies or TV shows, but you can find the cuddly guy wandering around the Disney theme parks so you know he’s legit, and not just some teddy that someone slapped the ‘D’ name on. Apparently, as the backstory goes, Duffy was created when Minnie made a teddy bear for Mickey to accompany him on his travels. She gave it to him in a duffle bag so Mickey named the bear Duffy.

Of course, no toy from the ‘House of Mouse’ would be complete without that familiar mouse-shaped icon so the Mickey logo can be found on Duffy’s feet, as a birthmark on his hip, and just take a look at that cute face. Does that patch of light fur remind you of anything 😉

If you don’t like mice, or if you have an undying, and possibly unnatural, love for both mice and bears, Duffy the Disney Bear is the cuddle-buddy you’ve been looking for. You can get him for $30 at Skymall and from $34.70 at Amazon.com.

There’s something about Mickey Mouse and gadgets. This popular Disney character has been a source of inspiration for computer mice, MP3 players, speakers, etc. The latest addition to the steadily growing stream of Mickey Mouse gadgets is this USB flash drive shaped liked one […]

Here’s a little something that will look great together with this USB Hub Cable, this Webcam with USB Hub and Fan or any of the other Mickey Mouse inspired gadgets we have covered here at GeekAlerts.

The GeekStuff4U.com webshop is offering a fun series of colorful (and b/w) computer mice and mouse pads with Disney inspired designs.

This Disney Mickey Suit Faux Leather Mini Backpack is for Disney fans who want Mickey Mouse with them to help carry their things. It shows off Mickey’s ears, glove and shorts on a backpack that holds your things. It is a Saffiano faux leather mini […]

Can you handle one more Disney gadget today? If not, move on, there’s nothing to see here. If you’re still around, you might like this new Mickey Mouse inspired USB lamp – a product that goes hand in hand with the Mickey Mouse USB Email […]

This cute and colorful speaker in the shape of a teddy bear works in the same was as the USB Sheep Speaker – simply hook up your iPod or any other portable audio device using the standard 3.5mm stereo audio jack, and you’re good to […]

Yes, it’s Mickey time again. Last week we saw the Mickey Mouse Glove USB Flash Drive, and now the Japanese company Sega Toys has announced yet another gadget inspired by the popular Disney mouse; a digital photo frame. In the same style as the Mickey […]

Think you’re too old for teddy bears? Think again because the Ted 16-Inch R-Rated Talking Plush Teddy Bear w/ Moving Mouth isn’t your average teddy. As a matter of fact, this foul-mouthed furry imp is almost exactly like the fun-loving bear in the movie… except […]

The Smart E Bear lets you connect him to your computer via USB. Then, once you have synced him with the downloadable software, he will start talking to your kid – by name.