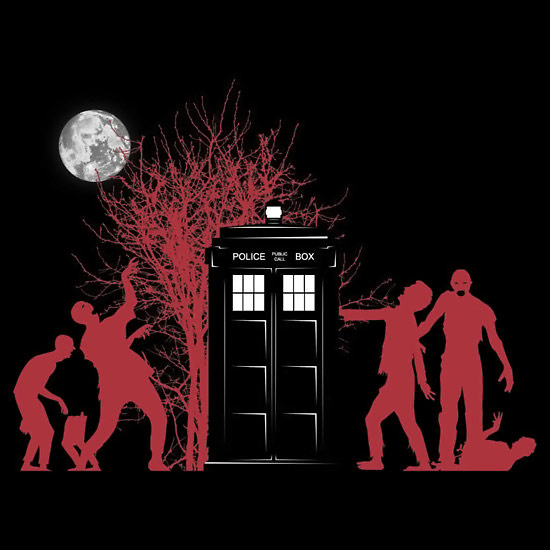 Forget about the Angels having the box because the Doctor Who Zombies Have the Box T-Shirt brings us a completely different type of big-bad in the Whoniverse.

The image on the shirt features a quiet, peaceful scene of the TARDIS beneath a tree as the full moon bathes the world in its soft glow. At least it would be quiet and peaceful if it wasn’t for the zombie silhouettes that are crowding around the Doctor’s blue box.

While the Doctor Who Dawn of the Doctor Zombie T-Shirt reveals how this encounter will eventually end, it’s nice to see the Time Lord (or perhaps the TARDIS itself) putting up a fight, as evidenced by the zombie that was apparently cut in half. I’m thinking it took more than a Sonic Screwdriver to do that. 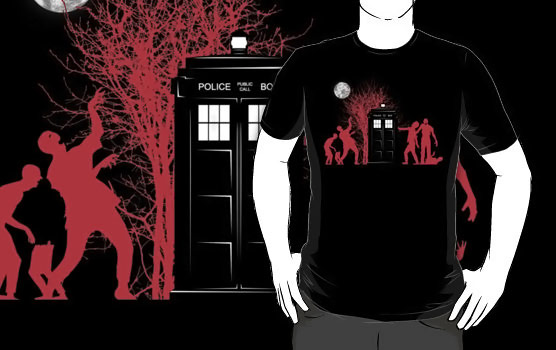 The Doctor Who Zombies Have the Box T-Shirt is available for $23.93 at RedBubble.com.

The zombie apocalypse has been cancelled because Elmer Fudd, the greatest hunter in the Looney Tunes universe, is on the job with the Be Vewy Vewy Quiet I’m Hunting Zombies T-Shirt. Elmer might not be the greatest friend to have if your name happens to […]

Plants vs. Zombies: The Zombies Ate Your Brains T-Shirt

Get your garden ready to stand against the zombie horde and proudly wear your Plants vs. Zombies: The Zombies Ate Your Brains T-Shirt to prepare for the inevitable end as you play the addictive Plants vs. Zombies game. When I first heard of PvZ, I […]