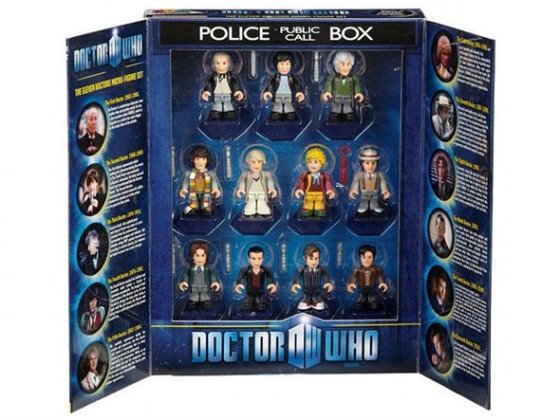 One of the more awesome Doctor Who sets that we’ve featured was the Dr. Who Eleven Doctor Action Figure TARDIS Box Set. Doctor Who fans like me didn’t think that any set could match it, but now we have found one that at least equals the awesomeness of that set. The Doctor Who: The Eleven Doctors Micro-Figure Set.

It’s basically the same set. You get all 11 Doctors once again, but this time they are tiny and cute. It comes in it’s own Tardis display box too. Just like the other set.

With this set you will have every Doctor that has ever been. Just $39.99 from Bigbadtoystore.

Always know what time it is no matter what time and space you find yourself in with this Doctor Who The Eleven Doctors Wall Clock. This awesome Doctor Who clock features the first 11 Doctors and the TARDIS. Now you will never be late for […]

Doctor Who 11 Doctors and TARDIS Poster

A new Doctor will soon be at the controls of the TARDIS so now is the perfect time to commemorate the Time Lord as he is now with the Doctor Who 11 Doctors and TARDIS Poster. The 24 x 36 poster features an artistic look […]