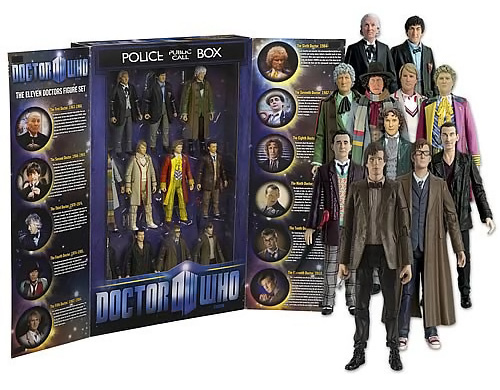 Quick! Who’s your favorite Doctor? It doesn’t matter with this box set because you get every single one of them. That’s right; this collection starts with Matt Smith’s 11th Doctor and goes all the way back to William Hartnell’s 1st Doctor.

All 11action figures are packed into a TARDIS display box, which has “doors” that open to reveal photos and a brief bio of all eleven Doctors.

Know anyone who’s crazy for Doctor Who? The Doctor Who Eleven Doctors Action Figure TARDIS Box Set for $84.99 (reg. $99.99) from Entertainment Earth is the perfect gift for all Whovians, regardless of which Doctor is their favorite.

One of the more awesome Doctor Who sets that we’ve featured was the Dr. Who Eleven Doctor Action Figure TARDIS Box Set. Doctor Who fans like me didn’t think that any set could match it, but now we have found one that at least equals […]

Doctor Who 11 Doctors and TARDIS Poster

A new Doctor will soon be at the controls of the TARDIS so now is the perfect time to commemorate the Time Lord as he is now with the Doctor Who 11 Doctors and TARDIS Poster. The 24 x 36 poster features an artistic look […]