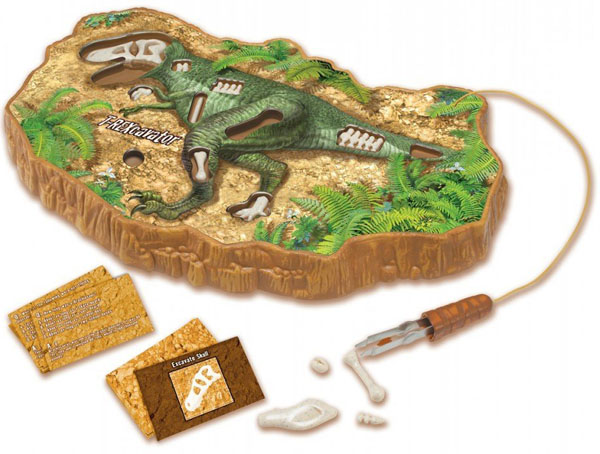 When I was still in my mother’s womb and my dad thought that I was a boy, he was so excited that he began buying all sorts of toys for boys. Remote-controlled cars, building blocks, toy trucks, and dinosaur figures–you name it, he had either bought it or was planning to. Long story short, he found out I was a girl a few weeks later, so he gave half the stuff away and ended up giving the rest to me, which is why I have this fascination with dinosaurs, even until today. (He gave away most of the cars and toy guns, but the dinosaur stuff, he kept for me.) So you can just imagine just how much I want one of these Discovery Exclusive T-Rexcavator Game.

The Discovery Exclusive T-Rexcavator Game is like operation, but instead you’re working on a skeletal Tyrannosaurus Rex instead of a human. Kind of like the Toy Story Operation, Operation: Family Guy Collector’s Edition, and Star Wars Operation.

T-Rexcavator lets your imagination soar. Pretend you’re a paleontologist on a dig, and you happen to come across the most astounding discovery possible: the skeleton of a T-Rex. Now you must remove each bone from the T-Rexcavator to preserve your find but if you touch the sides of the pit, youll hear a deafening roar. Collect the most bones and win the T-Rexcavator game! Dinosaur excavation challenge Collect the most bones and win Excavation tool for precision bone removal Dinosaur sound effects 12 bone Xcavation cards / 36 fun dinosaur trivia cards.

The skeleton of an extinct T-Rex has been discovered. Now it’s up to you to carefully remove each bone from the dig site. But watch out! Don’t touch the sides of the pit or the T-Rex will roar…and you’ll lose a turn. Collect the most bones and win! Ages 5 and up.

The T-Rexcavator Dinosaur Excavation Game is available at Amazon.com from $14.96.

A Dinosaur Poop Dig sounds disgusting, but it is actually pretty fun. You can excavate your very own coprolite, which is a fancy word for dino dukie. Each Dinosaur Poop Dig kit comes with a big block with a pooping dinosaur on it. You have […]

The mighty Tyrant Lizard, Dr. Ian Malcolm’s favorite dinosaur in Jurassic Park, is ready to become king of the bottles with the Tyrannosaurus Rex Dinosaur Bottle Opener. With a big head and tiny arms (hello fellow fans of Meet the Robinsons), this cast-iron dinosaur is […]

Do you know how a motor works? You can learn exactly how with the Discovery Motor Works Functional Engine Model. While they might have had kids in mind when they created this product, it would also be educational fun for adults. Besides, most adults don’t […]