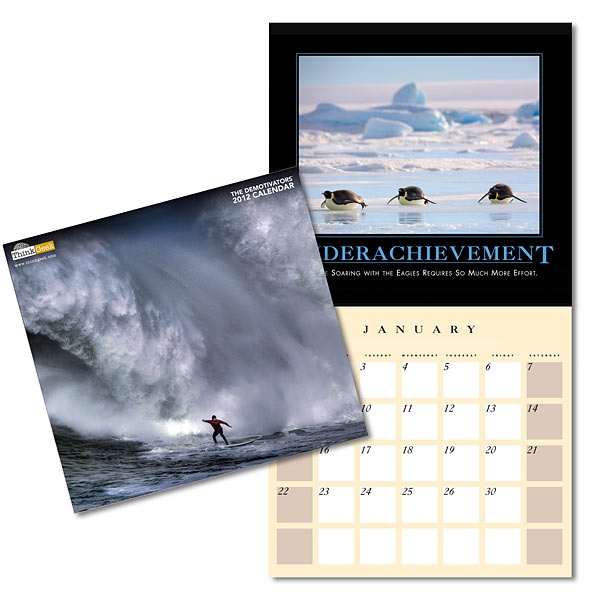 Everyone’s saying that 2012 will mark the end of the world, but really, we’ve all heard that prediction before. First it was the year 2000, and then it was a whole range of other dates when the “end” didn’t really come. The thought of the world ending is very depressing since there’s still so many things to do and so many places to go; which makes the Despair, Inc. 2012 Custom Calendar kind of fitting for the year.

Each month features a (usually funny) image with a fitting title and an even more fitting caption. You might have seen similar images before on sites like Facebook where they’ve already made the rounds. But this time, you get to enjoy a print version all year round.

We’ve teamed up with the geniuses at Despair, Inc. again to bring you a totally demotivating and hilarious 2012 calendar. You’ll get a different Demotivator each month (see below) as well as important dates in geek history. Impress your friends with your geeky trivia knowledge! Never forget Talk Like A Pirate Day again! Send @wilw a Happy Birthday tweet right on time! The superpowers you will gain from having this calendar cannot possibly be fit in one paragraph.

Even Time Lords need to plan their daily events and what better way to keep track of everything than to write it down on your very own Doctor Who 2012 Wall Calendar. This 2012 calendar is full of great color photos of the eleventh Doctor […]

Do you know what day it is? It’s tough keeping 365 days of the year straight all the time. Correction, this leap year has 366 days to make matters worse. I have to glance at the calendar at least ten times a day to figure out what today […]

This 2018 Comic Book Trivia Desktop Calendar is a great way to keep your comic book knowledge sharp throughout the year. It is a 2018 daily desktop calendar that features comic book quotes, trivia, and facts. Find out how much you know and how much […]

Do you find paper calendars wasteful? Digital and LED calendars just not your style? If you’re looking for an interactive, fun, and quirky sort of calendar, then I’m sure you’d probably go for the LEGO Brick Calendar. Not only is it extremely far from boring—it’s LEGO!