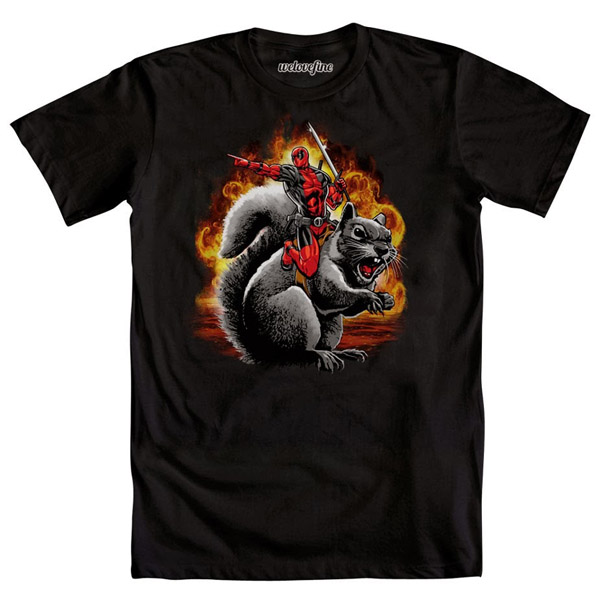 Some comic book characters are just more suited for oddball images than others. Take the Deadpool Squirrel Wrangle T-Shirt, for example. People would be like ‘WTF’ if that were Superman or Batman riding a giant squirrel, but Deadpool doesn’t even get a double-take because wacky situations and the merc with a mouth go together like peanut butter and jelly.

We’ve already seen Wade Wilson take on a shark, which can be a hard trick to beat, but riding a giant squirrel, with explosions in the background, does the job well. Things get even weirder when you realize it looks like Deadpool is giving orders from the back of the furry nut-chomper. Could there be a whole army of squirrel-riding characters under Deadpool’s command? The thought is a little scary. Not the squirrels; the fact that Deadpool might be in charge of something.

The Deadpool Squirrel Wrangle T-Shirt is available for $25 at WeLoveFine.com.

Everybody loves a little squirrel humor, whether it comes from something small like the Squirrel Coffee Cup, or something large like the Squirrel Mask. These ceramic Squirrel Salt and Pepper Shakers will put a smile on your face every time you need a dash of […]

End of summer sales are a great time to purchase beach towels and swimwear that you may have missed out on earlier…And I’m sure zombie fans will appreciate this Zombie Chomper Bikini, which will have you looking great no matter what time of year it […]

The Squirrel Pen is for fans of squirrels who love to write rather than type or use a touchscreen. It’s an elegant pen that looks just like our long tailed rodent friends. Put a Squirrel on your desk today with this cute pen and always […]