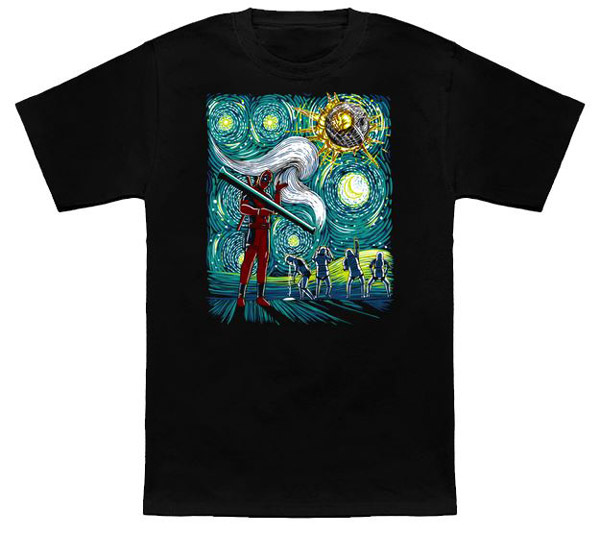 Deadpool enters the Star Wars universe and shows the Rebels how it’s done on the Deadpool ‘He Did It’ T-Shirt. He also upsets a few stormtroopers.

Emperor: We have Darth Vader and the power of the Dark Side itself.
Rebels: We have Deadpool.
Emperor: We’re screwed.

That’s how the battle against the Empire would’ve gone if Wade Wilson had been around.

With a background that resembles Van Gogh’s Starry Night, Deadpool stands with a giant bazooka as the Death Star explodes. Meanwhile, four Imperial stormtroopers realize they’re suddenly out of a job. I especially like the one that’s crying. I guess he had family on that Death Star. 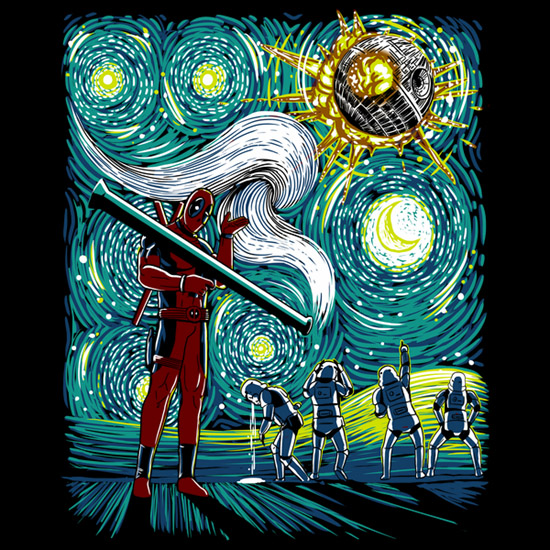 The Deadpool ‘He Did It’ T-Shirt is available for $19.95 at NeatoShop.

Zombies and art collide with the Starry Night Z T-Shirt, which is the only way you’ll want to check out the night sky when the undead are wandering around. Van Gogh’s Starry Night has invaded plenty of fandoms, including Firefly, Batman, and Doctor Who, so […]

Van Gogh continues to show love for all things geeky with the Firefly Starry Night T-Shirt. I always suspected he had a ‘brown coat’ hanging in his closet. What is it about the famous artist that has caused fans of various geekdoms to mix his […]

The Dark Knight meets Vincent Van Gogh on the DC Comics Batman Starry Night T-Shirt. Fans of the Caped Crusader fell in love with the Starry Knight T-Shirt, but that particular shirt has become as hard to grab as Batman himself. Fortunately, a new shirt […]

Classic art meets Gotham City on the Starry Knight T-Shirt, proving one thing – everything is better with Batman. Vincent van Gogh painted The Starry Night in 1889, long before things like the Bat Signal existed, but if he were to paint his masterpiece today, […]

Surviving a zombie apocalypse with a crossbow is cool but the Walking Dead Daryl Standing With Bazooka T-Shirt shows that a little more firepower is occasionally needed when you’re dealing with bad guys that still have a pulse. Inspired by the ninth episode of The […]