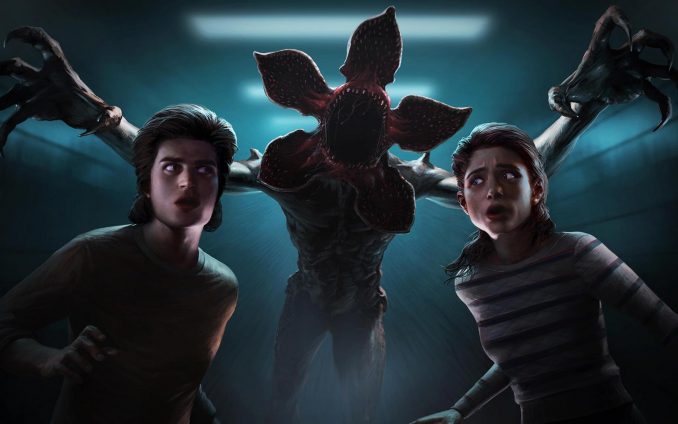 If you’re one of the multiplayer horror video game players that love Stranger Things, feast your eyes on the Dead by Daylight (Stranger Things) Trailer featuring a monstrously spine-chilling Demogorgon.

The Demogorgon, Nancy and Steve join the Dead by Daylight roster!

The Entity descends on the Midwestern town of Hawkins, Indiana as Stranger Things, the critically acclaimed Netflix Original Series enters the realm of Dead by Daylight.

The Chapter introduces a new Killer and two new Survivors to the realm of The Entity: the monstrous, otherworldly Demogorgon is the new untamable Killer. Against it stands not one, but two, new Survivors: Nancy Wheeler, a tough aspiring journalist, and Steve Harrington, a former high school jock with a knack for finding trouble.

The Stranger Things Chapter comes with a new map, the Underground Complex. Located below the Hawkins National Laboratory, this grim compound was once the setting for terrible experiments. One of these experiments caused an inter-dimensional rift to open, releasing dozens of monstrous creatures before being sealed off.

The Stranger Things Chapter launches in September on PC and consoles.

Dead by Daylight is an asymmetrical multiplayer (4vs1) horror game where one player takes on the role of the savage Killer, and the other four players play as Survivors, trying to escape the Killer and avoid being caught and killed.

Stranger Things 3 premieres today on Netflix, but you’ll probably be too busy enjoying a hot summer day outside with friends, family, BBQ, and fireworks celebrating Independence Day. However, you can still have some Stranger Things fun and beat the heat with this Stranger Things […]

Today is Memorial Day, which is the unofficial start of summer in the United States. It’s a good day to watch the Stranger Things 3 – Summer in Hawkins Trailer, to get in the mood for swimming pools, bathing suits, and sunshine. Hopefully it accomplishes […]

You can’t go back to the 1980s, but you can enjoy a bit of 80s style with this Stranger Things Dustin Camp Know Where Hat. It’s a yellow and green trucker hat that looks just like the one Dustin wears in Stranger Things Season 3. […]