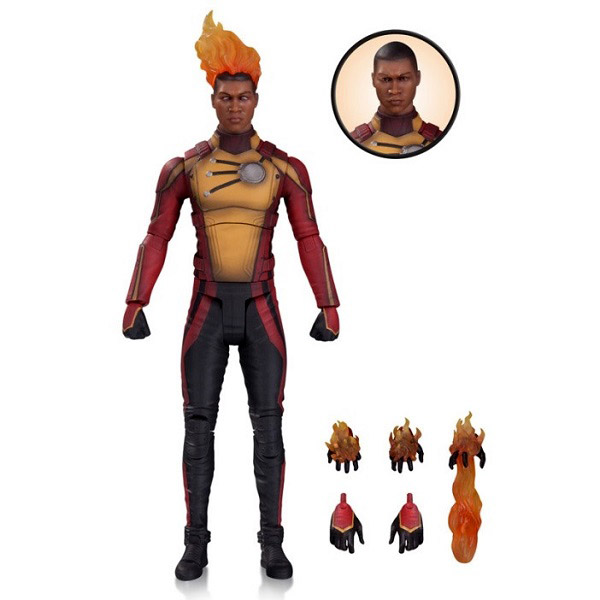 Two heads are better than one with the DC’s Legends of Tomorrow Firestorm Action Figure.

Standing 6 3/4-inches tall, the hero known as Firestorm, created by the merging of Professor Martin Stein and Jax Jackson, is ready to unleash his nuclear power in defense of the past, present, and future.

In addition to both a flaming and non-flaming head, the action figure also comes with a variety of interchangeable hands.

The DC’s Legends of Tomorrow Firestorm Action Figure will be available March 2017 but it can be pre-ordered now for $23.99 at Entertainment Earth.

Get your hands on a legend with the DC’s Legends of Tomorrow Hawkgirl Action Figure. She might have flown off into the sunset with her destined true love but that doesn’t mean the adventure has to be over. Become the master of Kendra Saunders’ destiny […]

Okay, so the Justice League Firestorm Pop! Vinyl Figure isn’t based on the character introduced in The Flash who later started traveling through time in Legends of Tomorrow, but without this fiery guy here, there would be no television version of the hero known as […]

This DC Comics Icons Firestorm Statue is full of great detail. This figure will bring the heat to your collection. Firestorm is dressed in his yellow and red outfit and stands on top of the DC Icons themed display base. He has his right arm […]

With BBQ season ramping up again, your stack of t-shirts should be ready for spur of the moment gatherings. Take a look at these threads that would earn you honorable mention among the crowd: the Relish Today Ketchup Tomorrow T-Shirt. Not only does the saying provoke big, […]

The First Order has relaxed the dress code, judging from the looks of the Lonely Warrior Tomorrow Queen Stormtrooper. I hope she has better aim than the regular Stormtroopers because this warrior isn’t dressed to take too much blaster fire, and as far as evading […]

Superman get’s a birds-eye view of Metropolis on the Man of Tomorrow Art Print. British illustrator and motion-graphics artist Chris Skinner brings us an eye-popping 18″ x 24″ black and white print that features Superman floating in the air next to the spinning globe of […]