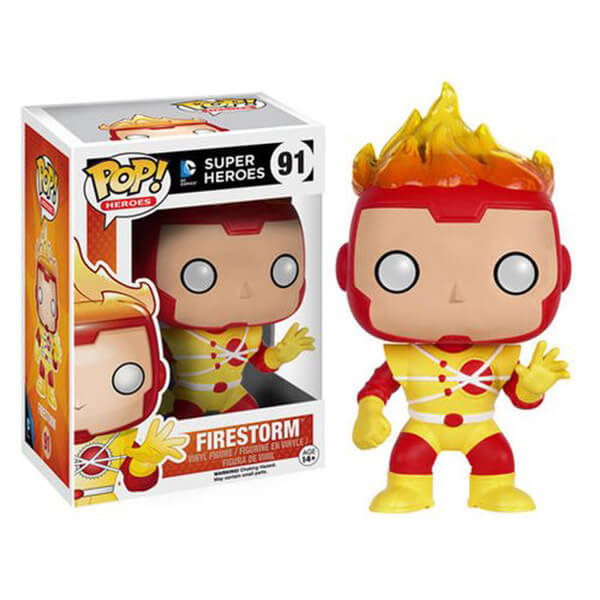 Okay, so the Justice League Firestorm Pop! Vinyl Figure isn’t based on the character introduced in The Flash who later started traveling through time in Legends of Tomorrow, but without this fiery guy here, there would be no television version of the hero known as Firestorm.

Long before they made their television debut, Ronnie Raymond and Professor Martin Stein were fusing together to fight the bad guys as Firestorm, the Nuclear Man. Of course, in the comics, it’s now Ronnie and Jason Rusch who create the fiery hero. Which version is this 3 3/4-inch-tall figure? The beauty of it is that you get to decide.

The Justice League Firestorm Pop! Vinyl Figure will be available June 2016 but it can be pre-ordered now for $9.99 at Entertainment Earth.

Two heads are better than one with the DC’s Legends of Tomorrow Firestorm Action Figure. Standing 6 3/4-inches tall, the hero known as Firestorm, created by the merging of Professor Martin Stein and Jax Jackson, is ready to unleash his nuclear power in defense of […]

This DC Comics Icons Firestorm Statue is full of great detail. This figure will bring the heat to your collection. Firestorm is dressed in his yellow and red outfit and stands on top of the DC Icons themed display base. He has his right arm […]