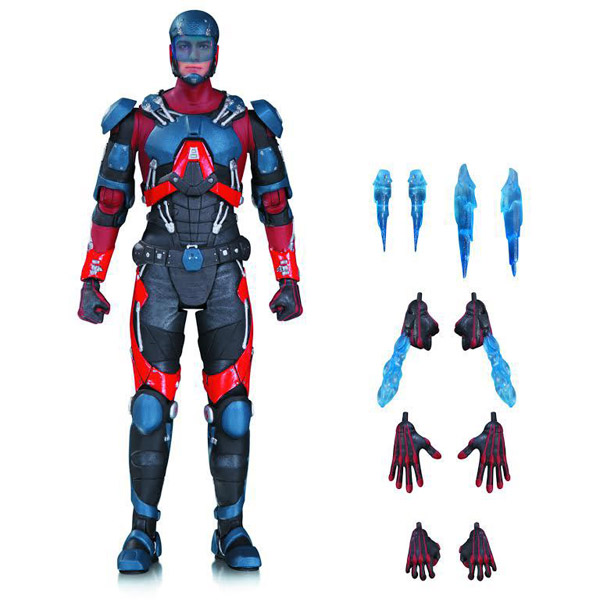 Ray Palmer isn’t cool or suave but he looks pretty good as the DC’s Legends of Tomorrow The Atom Action Figure.

Based on former Superman Brandon Routh’s portrayal of the size-changing Atom on the CW’s Legends of Tomorrow, this approximately 6 3/4-inch action figure features Ray Palmer in his A.T.O.M. armor, complete with accessories that include interchangeable hands and energy blast effects.

The DC’s Legends of Tomorrow The Atom Action Figure will be available March 2017 but it can be pre-ordered now for $23.99 at Entertainment Earth.

Get your hands on a legend with the DC’s Legends of Tomorrow Hawkgirl Action Figure. She might have flown off into the sunset with her destined true love but that doesn’t mean the adventure has to be over. Become the master of Kendra Saunders’ destiny […]

Two heads are better than one with the DC’s Legends of Tomorrow Firestorm Action Figure. Standing 6 3/4-inches tall, the hero known as Firestorm, created by the merging of Professor Martin Stein and Jax Jackson, is ready to unleash his nuclear power in defense of […]

Three size-changing heroes can be yours with the DC Icons Atom Action Figure 3-Pack. For those not familiar with the lady wearing the red and blue suit, Rhonda Pineda AKA Atomica isn’t really a hero, although she did a pretty good job of pretending to […]

If you are looking for a customizable fanless system then take a look at the new LGX Extended Temperature AU115 Atom System from Logic Supply. With features like an Intel Atom N270 processor, 945GSE chipset, low-profile chassis, operating temperature range of -20°C ~ 60°C, and […]

With BBQ season ramping up again, your stack of t-shirts should be ready for spur of the moment gatherings. Take a look at these threads that would earn you honorable mention among the crowd: the Relish Today Ketchup Tomorrow T-Shirt. Not only does the saying provoke big, […]