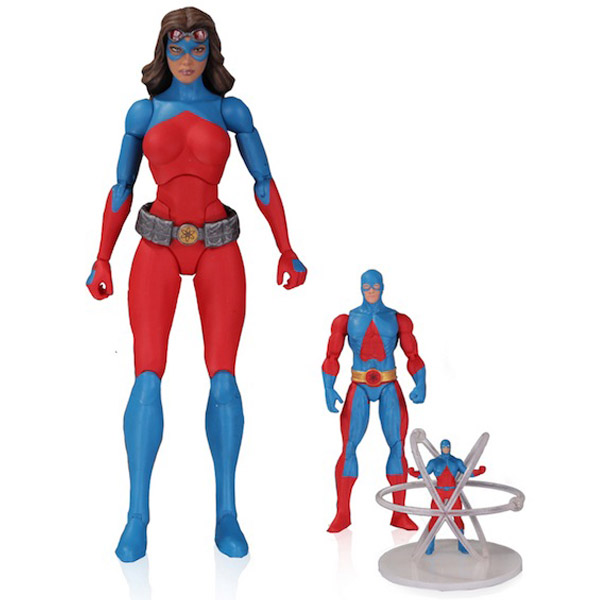 Three size-changing heroes can be yours with the DC Icons Atom Action Figure 3-Pack.

For those not familiar with the lady wearing the red and blue suit, Rhonda Pineda AKA Atomica isn’t really a hero, although she did a pretty good job of pretending to be one until her true allegiance to the Crime Syndicate of America was revealed.

The second character in the trio, captured mid-size, is Ryan Choi. Poor Ryan had a rough time as the Atom but he proved to be a true hero.

Finally, the last in the pack is the one most recognized as the Atom. Scientist Ray Palmer, featured in his miniature form, complete with the energy beams surrounding him that show he’s either growing or shrinking.

The DC Icons Atom Action Figure 3-Pack will be available February 2016 but it can be pre-ordered now for $22.99 at Entertainment Earth.

If you are looking for a customizable fanless system then take a look at the new LGX Extended Temperature AU115 Atom System from Logic Supply. With features like an Intel Atom N270 processor, 945GSE chipset, low-profile chassis, operating temperature range of -20°C ~ 60°C, and […]

Kara Zor-El is reborn and ready for action as the DC Icons Supergirl Action Figure. Inspired by Ivan Reis’ design for the Girl of Steel in DC Rebirth, Supergirl stands 6-inches tall in her new costume and comes with super-powered accessories that include 3 pairs […]

The DC Icons Robin and Superboy Action Figure 2-Pack gives you both Robin and Superboy in one great 2-pack. Damian Wayne and Jonathan Kent are featured in this amazing 2-pack with lots of interchangeable parts and accessories. Robin measures about 4 1/2-inches tall and Superboy […]

A moment that shook the comic book world to its foundation is recreated with the DC Icons Death of Superman Deluxe Action Figure 2-Pack. In 1992’s comic, The Death of Superman, something truly unthinkable happened. Superman actually died. Of course, he got better because he’s […]