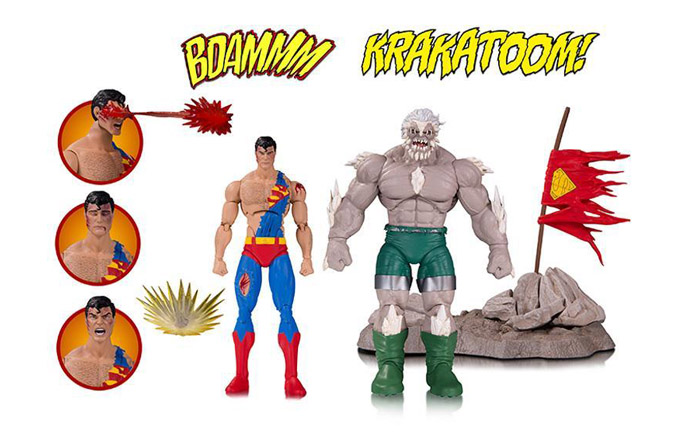 A moment that shook the comic book world to its foundation is recreated with the DC Icons Death of Superman Deluxe Action Figure 2-Pack.

In 1992’s comic, The Death of Superman, something truly unthinkable happened. Superman actually died. Of course, he got better because he’s the Man of Steel.

This action figure 2-pack brings that classic moment to the here and now with a six-inch-tall Superman and a 7-inch-tall Doomsday. Supes comes with 2 pairs of hands, multiple face sculpts, and a blast accessory, and the set includes a rocky base with Superman’s cape as a tattered flag and sound effect attachments from the comic book itself.

This Rocky 40th Anniversary 7-Inch Series 1 Action Figure Set is sure to bring back some memories of the Italian Stallion, Rocky Balboa. This set celebrates 40 years of the Rocky saga as well as the recent Creed movie. Series 1 focuses on Rocky III […]

Previously there were Star Trek Bathrobes and Darth Vader Bathrobes that may have been a bit too geeky for some people. Dialing down the geekiness and boosting up the coolness, these new Superman, Batman and Rocky Balboa Bathrobes are out there for all us superhero […]

This Rocky II Rocky 1:4 Scale Statue captures a great scene from the movie. Fans of the Rocky movies will want to display this piece prominently in their collection. Here Rocky is standing next to Butkus, Stallone’s pet dog in real life and in the […]