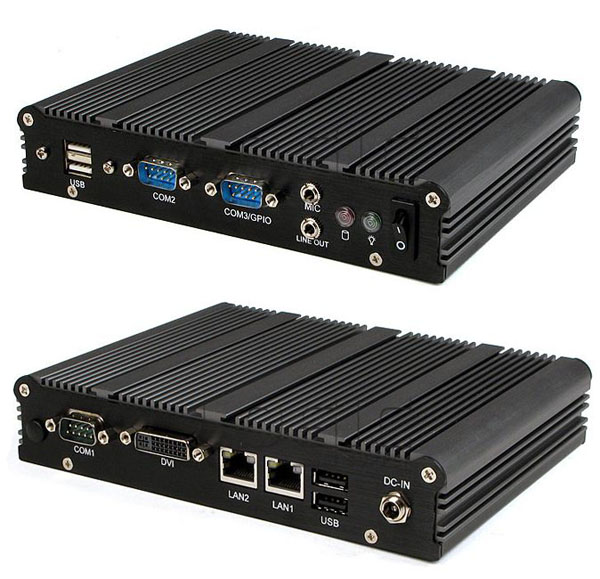 If you are looking for a customizable fanless system then take a look at the new LGX Extended Temperature AU115 Atom System from Logic Supply. With features like an Intel Atom N270 processor, 945GSE chipset, low-profile chassis, operating temperature range of -20°C ~ 60°C, and easy mountability, the AU115 is ideal for deployment in remote monitoring, outdoor kiosks, data acquisition, and networking applications.

The enclosed design protects the AU115 from exposure to the dust, dirt, and grime that are typically found on the factory floors or in mobile environments and it is MIL-STD 810F rated to withstand vibration and shock.

“There are a lot of fanless N270-based systems on the market, but what sets the AU115 apart is its ability to withstand environments with a wide temperature range while still maintaining a remarkably compact footprint. This combination of compactness and wide temperature operation allows the AU115 to be deployed in space-constrained installations that require enhanced vibration and thermal tolerances.”

You can learn more and purchase the LGX Extended Temperature AU115 Atom System at Logic Supply from $798.

If you are looking for a fanless system with high performance, you’re in luck. Logic Supply, a leading provider of specialized systems for industrial and embedded applications, just released the Nuvo 1300AF Fanless System with PoE. Featuring Intel Core i processors housed in a rugged […]

Three size-changing heroes can be yours with the DC Icons Atom Action Figure 3-Pack. For those not familiar with the lady wearing the red and blue suit, Rhonda Pineda AKA Atomica isn’t really a hero, although she did a pretty good job of pretending to […]

For frequent fliers and people that suffer from everyday stress, why not try the Homedics NMS-350 MAS Neck and Shoulder Massager Shiatsu with Heat.  This massager offers three different massage options (Shiatsu, vibration, or Shiatsu & vibration combined) with the option of using heat.  Why […]

We’ve covered LED message fans earlier, but not quite like this one. The black 6-inch diameter FanSee Digital Temperature Display Fan ($50) uses a high-luminosity LED display to show the temperature (in Fahrenheit) of the room – creating the illusion of the red text floating […]

Now that the new year is upon us, I’m sure many of you are setting New Year’s Resolutions. Exercise and diet always seem to be at the top of everybody’s list and this 10 Minute Whole Body Vibration Trainer from Power Plate is sure to […]

Are you looking to leave your laptop at home and travel extra light with a mini PC? If so you’ll be excited to know that the Giada i35V Series Mini PC with mSATA SSD is now available in the USA and Canada. Featuring a mSATA […]