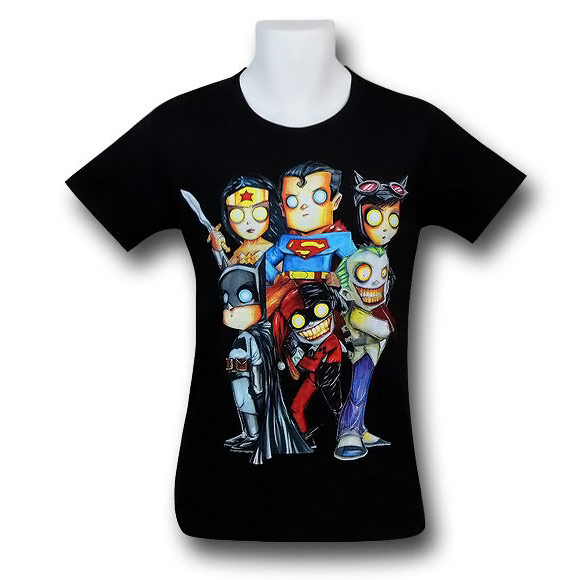 The DC Universe Grim Stares T-Shirt offers up a slightly disturbing look at some popular DC Comics characters as these familiar faces stare grimly at a world they seem less than thrilled about at the moment.

Wonder Woman, Superman, and Batman don’t seem nearly as heroic when they have a creepy gleam in their eye, although Batman doesn’t look much more intimidating than he usually does since his eyes are usually hidden anyway.

On the other hand, Joker and Harley Quinn appear more maniacal than ever, with Harley actually looking more disturbed than the Clown Prince of Crime. Meanwhile, Catwoman seems to have a zombie-style look going on, which really doesn’t do wonders for her sex appeal.

The DC Universe Grim Stares T-Shirt is available for $21.99 at SuperHeroStuff.com.

The Clown Prince and Princess of Crime don’t look quite like themselves on the LEGO Batman Movie Joker & Harley Quinn Girls T-Shirt. Does the Joker have fangs? Yes, it sort of looks like it, making the Clown Prince of Crime even scarier than he […]

It looks like the Clown Prince of Crime might have bitten off more than he can chew on the Batman DC Comics Bombshells Joker and Harley Quinn Statue as Nurse Harley tries to… uhh… check the Joker’s temperature. Does the Joker looked worried? It’s almost […]

True love is a beautiful thing, even when you’re talking about the DC Comics The Joker & Harley Quinn Wedding Poster. The blushing bride has been looking forward to this day ever since she first psychoanalyzed the Joker in Arkham Asylum, and the Joker has […]

A picture can be worth a thousand words, and the DC Comics Arkham City Batman And Harley Quinn T-Shirt has a lot to say. At the very least, Harley has a lot to say and she’s determined to be heard. The sexy and dangerous Harley […]

The Harley Quinn Bat Kiss T-Shirt proves that Harley has a very special way of keeping Batman’s attention. Poor Joker. It looks like Harley Quinn has ditched the Clown Prince of Crime for someone tall, dark, and brooding. It’s probably the car. Chicks dig the […]