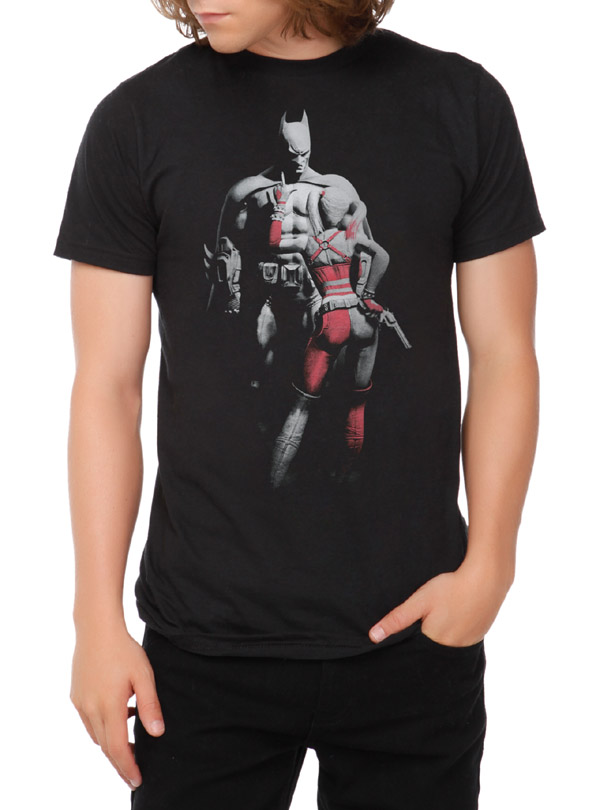 A picture can be worth a thousand words, and the DC Comics Arkham City Batman And Harley Quinn T-Shirt has a lot to say. At the very least, Harley has a lot to say and she’s determined to be heard.

The sexy and dangerous Harley strikes an intimidating pose as she lectures the Dark Knight, laying down the law and telling Batman how things are going to be. Of course, Bats doesn’t seem very impressed, and not very concerned that Ms. Quinn has a gun propped on her hip.

The characters on the black, 100% cotton t-shirt are modeled after the versions of Batman and Harley Quinn that appear in the Arkham City video game.

Add the DC Comics Arkham City Batman And Harley Quinn T-Shirt to your wardrobe for $16.88 at Hot Topic.

Batter up with the Batman: Arkham City Harley Quinn Limited Edition 1/6th Scale Statue, as Harley gets ready to hit a homerun with something that probably won’t be a baseball. Standing approximately 12-inches-tall, this 1/6th scale, highly-detailed and hand-finished statue features Harley in her Arkham […]

Everyone’s favorite queen of chaos is ready to sling some ink on the Harley Quinn Arkham Tattoos T-Shirt. Inspired by Margot Robbie’s Harley Quinn in Suicide Squad, artist Emilie_B created a detailed look at Harley getting busy with her tattoo gun. A close look reveals […]

Everyone wants to own a Harley and now’s your chance with the Batman: Arkham City Harley Quinn Life-Size Statue Foam Prop Replica. It won’t go ‘vroom vroom’ but that’s okay because this 5-foot, 11-inch tall figure is perfect for Batman fans who have a weak […]