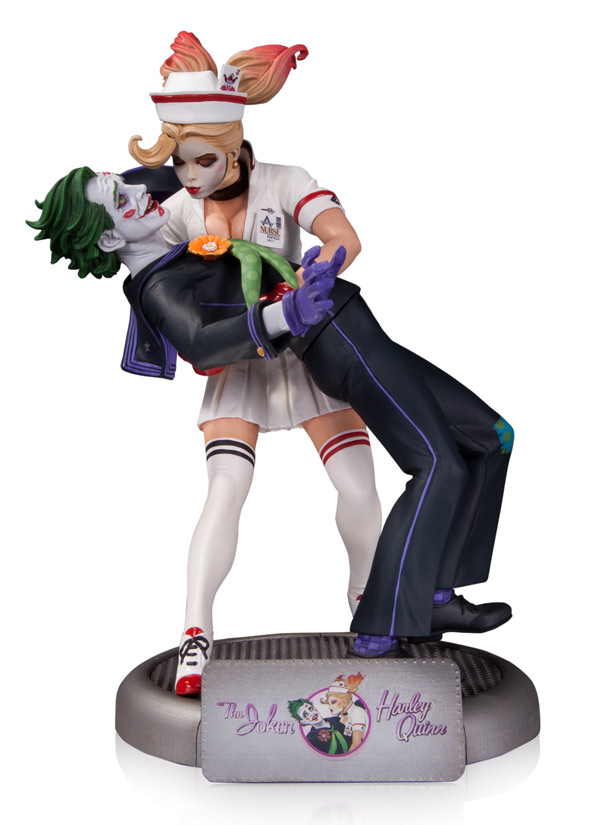 It looks like the Clown Prince of Crime might have bitten off more than he can chew on the Batman DC Comics Bombshells Joker and Harley Quinn Statue as Nurse Harley tries to… uhh… check the Joker’s temperature.

Does the Joker looked worried? It’s almost as if Batman’s fist was closing in on his face instead of the lips of Harley Quinn. I suppose both offer their own forms of pain and punishment, especially when Harley is tapping into her medical roots. If the Joker is worried now, just imagine how he’d look if Nurse Quinn pulls out the rubber gloves.

The lipstick-covered Joker and the love-struck Harley will be available on the Batman DC Comics Bombshells Joker and Harley Quinn Statue in December 2015 but it can be pre-ordered now for $219.99 at Entertainment Earth.

Is there a doctor in the house? Doesn’t look like it. Fortunately, the Clown Prince of Crime is in good hands with Nurse Harley in the DC Designer Series Bombshells Nurse Harley and The Joker by Ant Lucia Action Figure 2-Pack. Inspired by the DC […]

Hubba hubba. Harley Quinn is looking good in this DC Comics Bombshells Holiday Harley Quinn Statue. I am starting to see what the Joker sees in her. Ring in the holiday season with this amazingly detailed and fun statue. Harley is back and she is […]

Now you can have someone talk to the face while they talk to the hand when you wear the DC Comics Harley Quinn Face Gloves. When Jack Frost is nipping at your fingertips, you just tell that little frigid bugger to go pound snow because […]

True love is a beautiful thing, even when you’re talking about the DC Comics The Joker & Harley Quinn Wedding Poster. The blushing bride has been looking forward to this day ever since she first psychoanalyzed the Joker in Arkham Asylum, and the Joker has […]