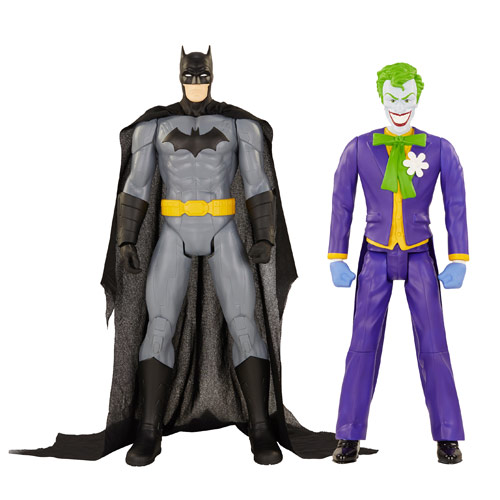 Gotham City has a big threat but it also has a big hero to protect it. The DC Universe 20-Inch Batman and Joker Action Figure 2-Pack brings us super-sized versions of the Dark Knight and the Clown Prince of Crime.

Standing almost two feet tall, Batman and the Joker are ready to continue their endless battle of Good vs Evil in your home, although they won’t be getting too freaky with the fight moves since they only have 7 points of articulation. That’s okay, though. These figures aren’t about being heavily-articulated; they’re about being 20-inches tall, and that’s enough to make them cool.

The DC Universe 20-Inch Batman and Joker Action Figure 2-Pack will be available November 2014 but they can be pre-ordered now for $44.99 at Entertainment Earth.

Love is crazy. Especially when both people in love are criminal psychopaths. This Batman Animated Series Mad Love Joker and Harley Quinn Action Figure 2-Pack celebrates the twisted love of two of Batman’s enemies. This special 2-pack is based on their appearances in Batman Adventures […]