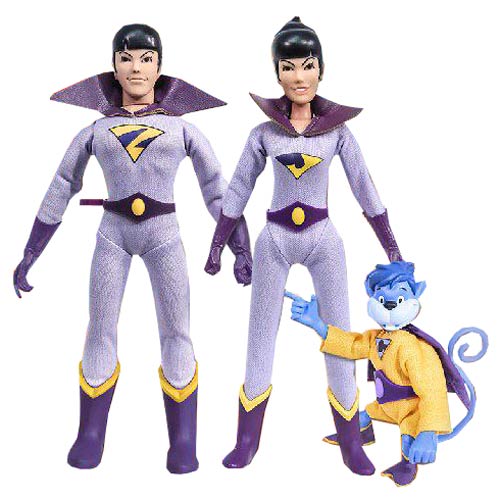 The DC Superfriends Series 1 The Wonder Twins with Gleek 8-Inch Retro Action Figure Set might not actually transform into a giant gorilla or a wall of ice, but they do have the power to remind you of the Saturday morning cartoons you watched as a kid.

In the 1970s, the power of cartoons brought us the Super Friends, with Wonder Woman, Batman, Superman, and a few other iconic faces. The show also brought us two weird-looking aliens with pointy ears and a blue monkey. The aliens were Zan and Jayna, a brother and sister capable of transforming into a variety of things after doing a super-fist-bump. The blue monkey was Gleek, capable of… hmmmm… I honestly don’t know. I think he was just a blue monkey.

Zan and Jayna stand approximately 8-inches tall, while Gleek is a little shorter.

The DC Superfriends Series 1 The Wonder Twins with Gleek 8-Inch Retro Action Figure Set will be available February 2016 but it can be pre-ordered now for $79.99 at Entertainment Earth.

If you’ve never been called a monkey, then you’re either a very successful business person or have a very loving mother. Either way, you’ve been missing out and now is the perfect time to let your inner monkey lose. Suit up in the Volcom Monkey […]

Look! Up in the sky! It’s a bird, it’s a plane, it’s… a Screaming Slingshot Monkey howling through the air as he flies for truth and justice, or maybe just a laugh or two. Admit it. When you get bored, you dream of livening things […]

We all know monkeys love bananas, and this Mad Monkey here is no exception. Its not-too-distant relative, the Mimicking Monkey, is a much calmer member of the monkey species, and I’m sure you’ll come to the same conclusion once you see how mad this monkey […]

if you don’t like the soft touch of the Plush Monkey USB Speakers, here’s an alternative that might suit you better. Or, use them together with the Monkey USB Webcam with Pen Holder. Features: Recharged by USB Built-in rechargeable Lithium Ion battery Simple, just plug-in, […]

My refrigerator isn’t the most organized space in my home. When I’ve got visitors, I stock up on a lot of bottled drinks and soda making an already messy fridge messier. It’s during times that like this that you’ll find gadgets like the Fridge Monkey […]

It might be way too early to get a sound machine for your little one, but it will never be too soon if you get them one of these Mimicking Monkeys. It’s a cute and cuddly monkey plush toy that emits soothing sounds from the […]

Remember those Windows screensavers that featured some dancing naked babies who would groove their way all across the screen until you gave the mouse a nudge or resumed working? I wasn’t a huge fan of those because I personally found the babies a bit creepy. […]

New doesn’t really mean new with the New Teen Titans Retro 8-Inch Action Figures Series 1 but it does mean awesome. Once upon a time ago in comic book land, a group of young heroes banded together to form the New Teen Titans. Since then, […]