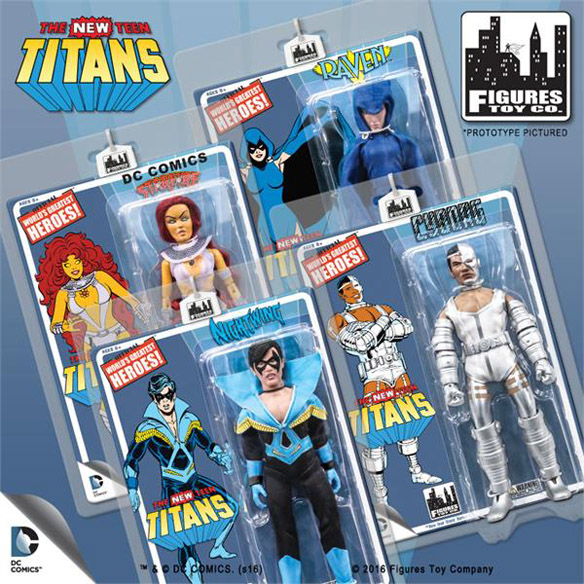 Once upon a time ago in comic book land, a group of young heroes banded together to form the New Teen Titans. Since then, the Teen Titans have gone through a few transformations, even growing old enough to drop Teen from their name and simply be known as the Titans.

But this four-pack action figure set is about that very first incarnation, which included Cyborg, Raven, Starfire, and Dick Grayson’s new Batman-less alter-ego, Nightwing, who could rock a popped collar like nobody’s business.

I’m pretty sure Wonder Girl and Kid Flash were part of the roster, too, but they apparently didn’t get the memo about action figure day.

Each figure includes an authentic cloth outfit and comes in a resealable plastic clamshell package that can be opened and closed without damaging anything. Yes, someone finally figured out how to make these things more user-friendly.

The New Teen Titans Retro 8-Inch Action Figures Series 1 will be available approximately July 2016 but it can be pre-ordered now for $107.96 at Figures Toy Company.

This DC Retro New Teen Titans Series 1 8-Inch Action Figure Set is not only retro, but fully articulated in the Mego-style as well. You get Nightwing, Starfire, Cyborg, and Raven. They all stand 8-inches tall! Each figure includes over 15 points of articulation. This […]

Are you feeling lucky? Are you prepared to come face-to-face with the Doctor? How about a Dalek or Cyberman? The Doctor Who Titans Blind Boxed Vinyl Figures will keep you guessing until the last minute, but any Doctor Who fan will be happily surprised, regardless […]

Collect all 16 of these Ghostbusters Titans Collection Blind Box Vinyl Figures. Each of these three-inch-tall vinyl figurines comes blind-boxed, which means they are chosen randomly. So you never know what you are going to get. These are a perfect addition to your Ghostbusters collection. […]

There have been increasingly more and more quirky ways of getting a note or message out there rather than just using Post-its. For one, there’s the Switch Notes which lets you stick your notes on light switches. Then there’s the Doorpad Hanging Notepad that reminds people […]

The fun and cute little memo pad is guaranteed to put a smile on the faces of your colleges as they are passing by your office desk.

Fans of Buffy The Vampire Slayer will want to collect all of these Buffy Blind Box Titans and get them all. There are 16 different figures that will help you act out all your favorite scenes. They are blind boxed so you never know who […]

There was a time when cloth was king when it came to action figures, or at least it seemed like it was because even characters that didn’t wear clothes were going with the cloth look. The Universal Monsters Series 3 Retro Cloth Action Figures bring […]