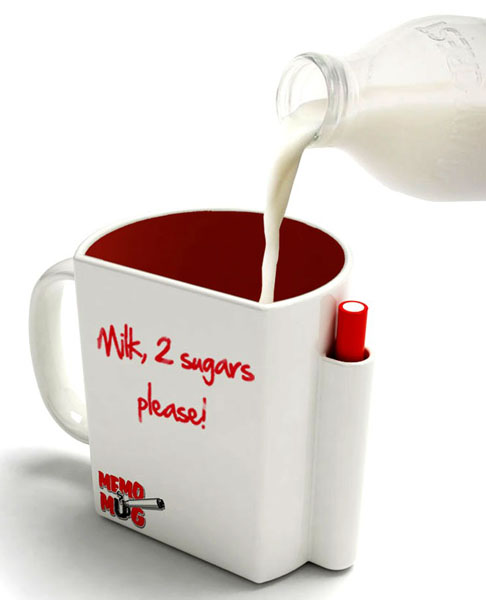 There have been increasingly more and more quirky ways of getting a note or message out there rather than just using Post-its. For one, there’s the Switch Notes which lets you stick your notes on light switches. Then there’s the Doorpad Hanging Notepad that reminds people some last minute stuff, just before they head out the door. For all other reminders, they can be written down on the Memo Mug.

The Memo Mug is a neat idea because it reminds people of what they need to do while they’re at work. Specifically, after their coffee break. The mug comes with a non-toxic marker that can be used to scribble down messages on the flat surface of the mug. It’s also a way to have reminders just right there in front of you while you sip your morning coffee. 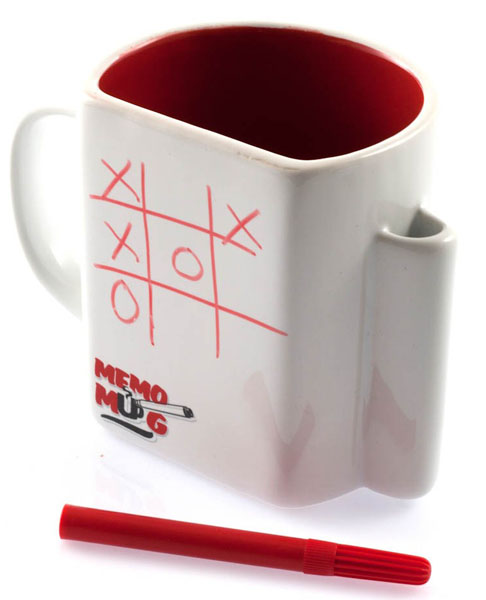 Wow! The Memo Mug is one of those things you won’t remember how you lived without… Memo Mug is a ceramic mug that doubles up as a dry-wipe message board. This cool mug is carefully designed so you can easily write your own notes and messages on the straight edge surface. The integrated pen holder means you’ll always have a pen on hand when you need to jot down those really important notes.

The fun and cute little memo pad is guaranteed to put a smile on the faces of your colleges as they are passing by your office desk.

This erase memo board will make sure you never miss an important note again. Simply hang it hang it on the fridge or place it on the counter, and a blue light that slowly flashes will catch your attention every time you walk by.

The Erasable Memo Pad and Pen is the perfect desktop accessory to get when you (or your office) wants to begin going paperless. This silicone-made duo will become your new re-usable best friend: just jot down messages, phone numbers, reminders, quotations, and all sorts of […]

Memos on your desk. Memos stuck on your wall. Memos on your computer monitor. Memos beside your tape dispenser. Memos falling to the floor. Memos are everywhere when you’re in a busy office environment. Misplaced and lost memos result in a lot of hassle (not […]

Don’t be slow as a sloth or you might miss out on this Sloth Sticky Memo Set. It is shaped like a sloth on a branch plus you get baby sloths. That’s a lot of sloths. Each set includes 4 pads (with 25 sheets each). […]

Stay organized with these Rick and Morty Memo Tab Stickies. They work great as little post-it notes for reminders and short messages or to mark important pages in a book. There are 5 different colors and each has a different Rick and Morty character: Morty, […]

Haven’t you heard the latest? Handwritten notes are out, and so are text messages and IMs. The coolest way to communicate, whether you’re at home or in the office, is through coffee mug–via the Mixed Messages Mug. Of course, they only work best if the […]

When you want to leave a note for someone you might as well do it on this Retro Television Memo Board. Every message will be like the intro to a vintage TV show. It features a great retro design with a glass surface for writing […]

Cats in the Box Memo Tabbies

These Cats in the Box Memo Tabbies are adorable. You get 100 sticky tabs (25 of each of the 4 kitty designs). They all have blank bellies, which are the perfect place to write a note. The set comes packaged in a cute cardboard box […]