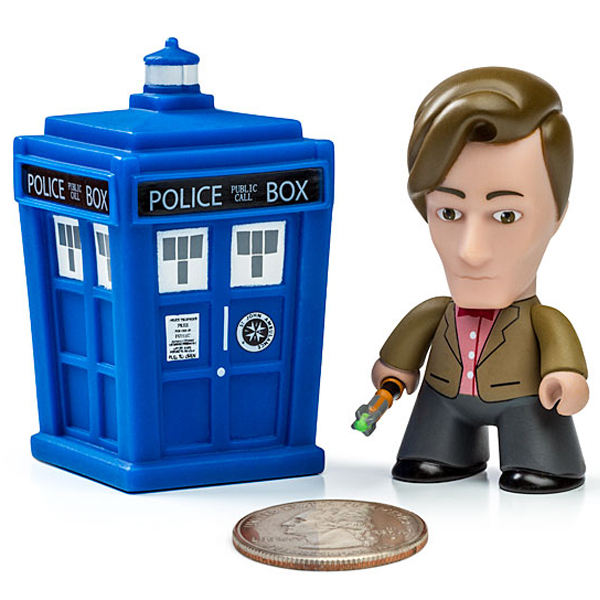 Are you feeling lucky? Are you prepared to come face-to-face with the Doctor? How about a Dalek or Cyberman? The Doctor Who Titans Blind Boxed Vinyl Figures will keep you guessing until the last minute, but any Doctor Who fan will be happily surprised, regardless of what comes out of the box.

Each figure stands 3-inches tall and every single one of them will make you feel like a kid on Christmas morning because you can’t specify which of the 14 figures you want. Maybe you’ll open the box and see an Ood or the Doctor himself, or maybe even the TARDIS, which would be awesomely cool because there’s just something mind-boggling about a box in a box, especially when one of those boxes is smaller on the outside.

Keep in mind that the “blind box” idea is half the fun so you can’t return the figure once the box has been opened.

You can get the Doctor Who Titans Blind Boxed Vinyl Figures for $9.99 at ThinkGeek.com.

Collect all 16 of these Ghostbusters Titans Collection Blind Box Vinyl Figures. Each of these three-inch-tall vinyl figurines comes blind-boxed, which means they are chosen randomly. So you never know what you are going to get. These are a perfect addition to your Ghostbusters collection. […]

Fans of Buffy The Vampire Slayer will want to collect all of these Buffy Blind Box Titans and get them all. There are 16 different figures that will help you act out all your favorite scenes. They are blind boxed so you never know who […]

New doesn’t really mean new with the New Teen Titans Retro 8-Inch Action Figures Series 1 but it does mean awesome. Once upon a time ago in comic book land, a group of young heroes banded together to form the New Teen Titans. Since then, […]

These Star Trek The Original Series Blind Box figures are adorable. Collect all 16 figures.You might get Kirk, Spock, Bones Chapel, Rand, Scotty, Sulu, Uhura, a Gorn, Khan, Vina, Pike, a Balok, and a Talosian Keeper. If you get lucky you may get a chase […]

Your Doctor Who collection is not complete without this Doctor Who Titans Trenzalore TARDIS 8-Inch Vinyl Figure. “On the fields of Trenzalore, at the fall of the eleventh, when no living creature can speak falsely or fail to answer, a Question will be asked, a […]