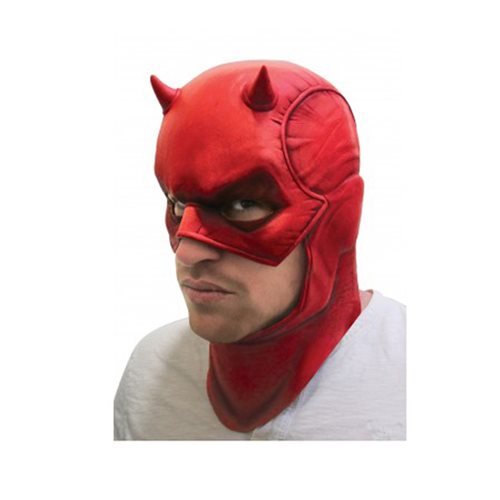 Unleash your inner devil with the Daredevil Overhead Mask and become a man without fear.

To some, he’s the Devil of Hell’s Kitchen. To others, he’s Daredevil. To bad guys, he’s the angry dude who punches you in the face before, during, and after asking questions. While the look of this over-the-head mask is modeled more towards the comic book than the Netflix series, it still looks pretty intimidating. Just don’t get carried away when you put it on and go looking for fights with anyone referred to as Kingpin.

The Daredevil Overhead Mask will be available July 2016 but it can be pre-ordered now for $46.99 at Entertainment Earth.

The devil of Hell’s Kitchen steps out of the shadows for the intimidating Daredevil ‘The Blind Devil’ T-Shirt. A cool splatter-paint effect gives this sight-impaired vigilante a rough and rugged look, complete with red splatter on his face that resembles blood, which is fitting because […]

Daredevil ‘The Devil in Me’ T-Shirt

Pull on the Daredevil ‘The Devil in Me’ T-Shirt and get ready to see world on fire… or maybe the world won’t look any different, but your fashion sense will definitely be on fire. Artist DJKOPET brings us a blood-spatter silhouette of Daredevil, with an […]

I know that many people loved Avatar’s groundbreaking 3D effects, but it doesn’t get any more 3D than putting on your own Avatar Deluxe Overhead Adult Jake Sully Latex Mask and playing Avatar in real life.

As seen on the Daredevil ‘The Devil’ Art Print, the man in Karen Page’s life is a real devil. A dangerous man and a woman who finds herself in dangerous situations. Is it any wonder that Karen Page and Matt Murdock entered each other’s lives? […]

Wilson Fisk has never looked deader than he does as the Marvel Zombies Kingpin Mini-Bust. Most people might view that as an insult but the Kingpin doesn’t mind because he’s a zombie. When the zombie plague invaded the Marvel universe, it struck everyone. The rich, […]

Fans of the epic action fantasy movie Sucker Punch are going to want to get their hands on the Sucker Punch Deluxe Adult Zombie Gas Mask. This mask is perfect for Halloween parties or for your private collection of movie collectibles. If your imagination is […]