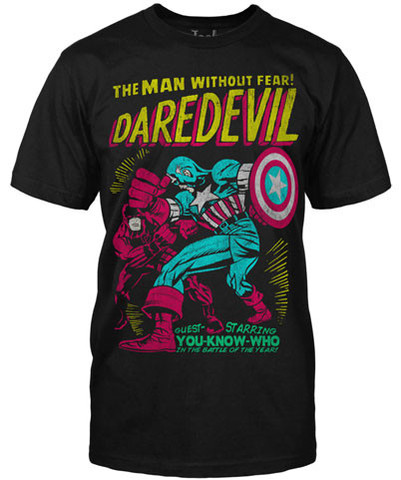 Two Marvel characters get ready to trade blows in a classic fight on the Daredevil Neon Cover T-Shirt.

These days, it could easily be viewed as the small screen versus the big screen as Daredevil takes on Captain America. What could make the first Avenger go against the Man Without Fear? No idea, but I’m sure it was an exciting fight. If the image looks vaguely familiar to you, it might be because it was the cover of a Daredevil comic book… way back when comic books were only twelve cents.

The brightly-colored shirt, part of Jack of All Trades new Neon collection, is 100% pure cotton. 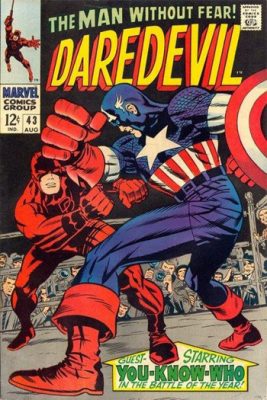 The Daredevil Neon Cover T-Shirt is available for $25 at Jack of All Trades Clothing.

If you want to sip your drink the long way while looking infinitesimally cooler (or weirder–it could go both ways, depending on your current look or demeanor), then these Neon Drinking Straw Sunglasses are the straws-slash-glasses for you. Wear it loud and wear it proud. […]

The Mandalorian bounty hunter gets groovy on the Boba Fett Neon T-Shirt, with a psychedelic image that still manages to convey how tough the clone is. Boba’s armor is designed to blend in with the crowd, with the colors being so bland they barely register […]

If you’re familiar with Dia de los Muertos (Day of the Dead), then you know about Sugar Skulls.  You’ll also readily see the inspiration behind this cool new Storm Neon Candy Trooper T-Shirt.  This awesome tribal design would look great on a tattoo, and this […]

What do you want to be a guru of? It might not pack Bluetooth like the sWaP Cell Phone Watch or take a SIM card like the Cell Phone Watch with Dual SIM and Touchscreen, but the Neon LED Guru Watch does something those others […]

He might not believe in the Force but the Disco is strong in the Neon Han Solo T-Shirt. Let this black tee transport you back to 1977, back to a more innocent time before that punk, Ben Solo, existed, before Rebels and Death Stars and […]

Here’s a fun and cool way to decorate and light up your office or home desk in a retro modern way, using neon signs that are powered by USB.

Even during the darkest of times in the DC Universe, the Last Son of Krypton has acted as a guiding light for those that seek to be heroes, and the Neon Superman Sign will now let the Man of Steel guide you through the darkness […]

This Batman Neon Symbol Black Bi-Fold Wallet is the next best thing to having a bat signal in your pocket. Just whip it out, let the light hit that neon Bat symbol and impress your friends and the cashier. It is made from a combination […]

If there’s something strange in your neighborhood, you know who to call. The Ghostbusters. Or you could just set up your own Ghostbusting agency. If you do that though, you will need a sign to announce your services. What better sign than this Ghostbusters Logo […]