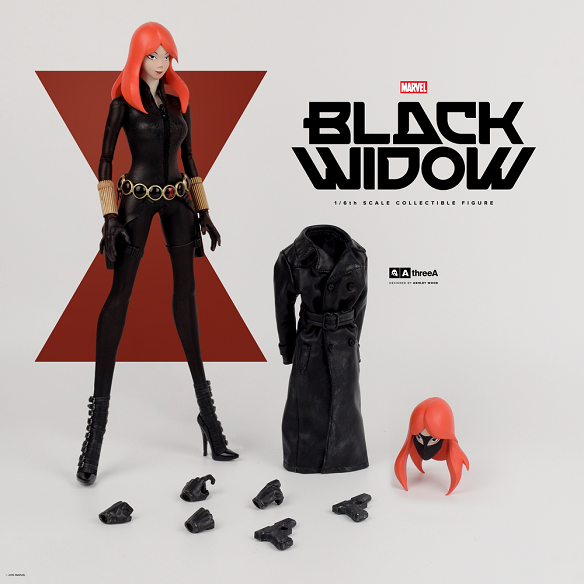 Unlike the spider she’s named after, the Black Widow by Ashley Wood Sixth-Scale Action Figure won’t bite you, but you’ll still feel the itch to add her to your collection.

It doesn’t matter if you’re a Marvel fan, a Black Widow fan, a ThreeA fan, or someone who really loves the comic book art of Ashley Wood, this 13-inch-tall figure has what you need.

With 24-points of articulation, this unique look for Black Widow includes a faux-leather trench coat, 3 sets of interchangeable hands, 2x Glock 17s with holsters, and an interchangeable head that lets the Widow wear a mask. Has she worn a mask in the comics before? No, but it still looks cool.

The Black Widow by Ashley Wood Sixth-Scale Action Figure will be available June 2017 but it can be pre-ordered now for $159.99 at Entertainment Earth.

The star-spangled first Avenger gets a new look with the ThreeA Toys Captain America Sixth-Scale Figure. Artist Ashley Wood is at it again, blending the classic style of Captain America with her own unique style to create a hero that still honors his classic comic […]

Natasha Romanoff leaves her Avenger friends behind to take care of some personal business in Black Widow: Forever Red, written by best-selling Margaret Stohl, who co-wrote the popular Beautiful Creatures series. She’s helped save the world numerous times alongside heroes like Thor and Captain America, […]