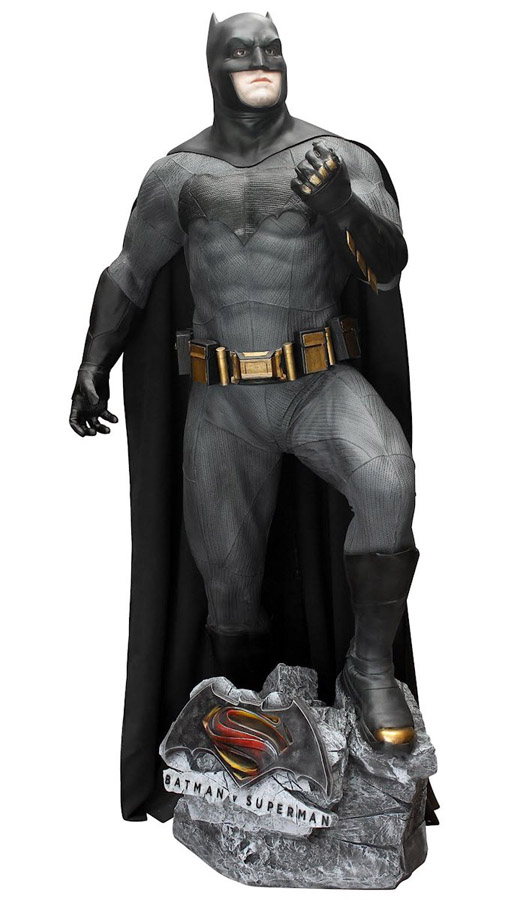 Do you bleed? You will if the Batman v Superman Life-Size Batman Statue falls on you. Okay, maybe you won’t actually bleed but you might have one or two broken bones. In other words, it will be like actually getting beat up by Batman. How cool is that?

Standing approximately 7-feet tall, the Dark Knight stands on top of a base that features the Batman v Superman logo. The highly-detailed costume perfectly captures the new bat suit worn by Ben Affleck in the film.

The Batman v Superman Life-Size Batman Statue will be available May 2016 but the first ten can be pre-ordered now for $4,397 at StylinOnline.com. After the first ten are ordered, the price goes up to $4,697.

By now, you’ve probably heard the news about Ben Affleck snagging the role of the Dark Knight in the future Batman/Superman film, and the Batman The Dark Horse Ben Affleck T-Shirt will let you show people exactly what you think about that. It’s the crossover […]

Deadpool Batman ‘Do You Bleed’ T-Shirt

The Dark Knight is really fixated on finding out if people bleed these days, and the Deadpool Batman ‘Do You Bleed’ T-Shirt shows that the Merc with the Mouth isn’t afraid to answer the question truthfully. Does Wade Wilson bleed? Of course he does. He’s […]

The Dark Knight prefers blending in with the shadows, becoming one with the night, but the Batman v Superman Batman Life-Size Figure is the opposite of that. It’s big, and it’s an attention-getter. Standing approximately 6.33ft tall (7.15ft with the base), and based on the […]

Become Ben Affleck’s Dark Knight with the Batman v Superman Bat Suit FB Sublimated T-Shirt and be prepared to take down super-powered aliens from another planet. Give yourself bonus points if you can ask ‘Do you bleed’ in an angry-sounding voice. There are plenty of […]

Batman v Superman: Dawn of Justice Do You Bleed T-Shirt

The best line in the trailer can now be on your chest with the Batman v Superman: Dawn of Justice Do You Bleed T-Shirt. The action-packed not-quite-a-sequel to Man of Steel looks like it will have some great moments in it but one of the […]