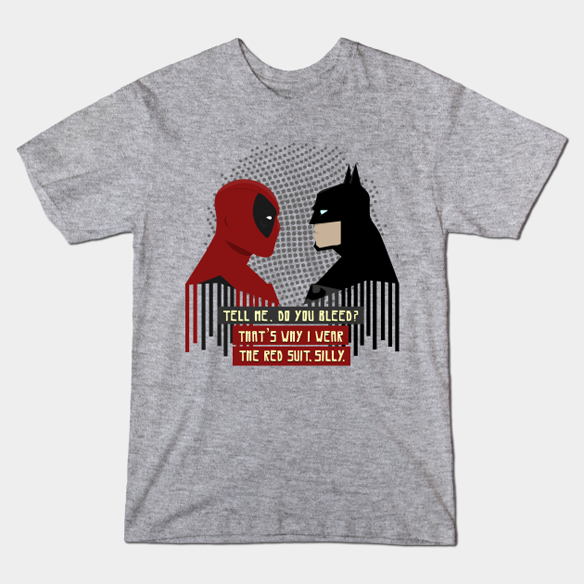 The Dark Knight is really fixated on finding out if people bleed these days, and the Deadpool Batman ‘Do You Bleed’ T-Shirt shows that the Merc with the Mouth isn’t afraid to answer the question truthfully.

Does Wade Wilson bleed? Of course he does. He’s not some alien freak from another planet. But he knows there’s one major rule in life – never let them see you bleed, which is why he wears the red suit… which is probably a lot better than wearing a brown one because the implications of a brown suit aren’t pretty.

Artist Daniac is the mind behind this interesting Marvel/DC crossover that combines Deadpool with Batman’s attention-getting question in Batman v Superman.

The Deadpool Batman ‘Do You Bleed’ T-Shirt is available for $14 at TeePublic.com.

Need an eye-catching piece of wall art to celebrate Batman’s 75th anniversary? The Batman 75 I Bleed for Gotham Art Print is sure to get plenty of attention. Cleaning up Gotham City is hard work so it makes sense that having a little blood spilled […]

Batman v Superman: Dawn of Justice Do You Bleed T-Shirt

The best line in the trailer can now be on your chest with the Batman v Superman: Dawn of Justice Do You Bleed T-Shirt. The action-packed not-quite-a-sequel to Man of Steel looks like it will have some great moments in it but one of the […]

Wade Wilson breaks his rule about wearing red with the Deadpool Black Suit ArtFX+ Statue. I mean there’s red in this suit, too, but I’m pretty sure the bad guys will see him bleed. Even fourth-wall-breaking guys who look like an avocado that did the […]

With the Deadpool Dead Gorgeous On Arrival Handbag, the Merc with the Mouth becomes the Bag with the Style. If you like red and black and Deadpool, you can’t go wrong with this stylish bag. In addition to Wade Wilson’s eye-catching color combo, the bag […]

If you want to look just like your favorite Marvel hero Deadpool, look no further than this awesome Deadpool Hoodie. Just zip up and you are instantly Marvel’s wisecracking hero. The hood has eyeholes and transforms into a mask when pulled over your head. Perfect […]

Wade Wilson is ready to make you bleed… with awesomeness. Don’t worry, though, because the Deadpool Red Wash T-Shirt is red so the bad guys won’t see you bleed. They will, however, realize that you’re awesome. Deadpool does what he does best on this 100% […]

The Merc with the Mouth gets all glowy with the violence on the Deadpool Blam Blam Blam Glow-In-The-Dark T-Shirt. Made of 100% cotton, this black tee features Deadpool two-gunning a bad guy, showing that he has more than enough bullets to take care of business. […]