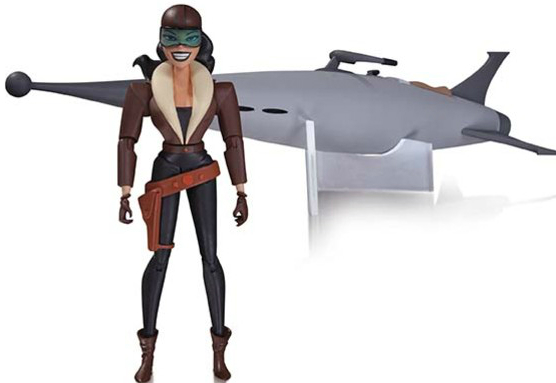 A new character in the Batman universe rockets onto the scene with the Batman The Animated Series Roxy Rocket Deluxe Action Figure.

As far as villains go, Roxy is pretty tame but she sort of shares a bond with Harley Quinn. Roxy Rocket blasted into Batman’s world in The Batman Adventures Annual #1, based on Batman: The Animated Series. After a few more animated cameos, she finally became part of the main DC Universe in 2006, which is similar to the origin of Harley, who also made her first appearance in Batman: The Animated Series and then later switched to the main DCU.

The 5 1/2-inch-tall figure comes with accessories, a display base, and 12 1/4-inch-long rocket with working lights.

The Batman The Animated Series Roxy Rocket Deluxe Action Figure will be available August 2015 but it can be pre-ordered now for $34.99 at Entertainment Earth.

The raccoon with the big mouth, the big attitude, and an even bigger gun is back with the GotG2 Rocket Raccoon Deluxe Version Sixth-Scale Figure. Based on the character’s appearance in Guardians of the Galaxy Vol. 2 and standing 6.29-inches tall, Rocket comes with galaxy-guarding […]

Forget the purple and yellow because the Batman: The Animated Series Batgirl Grey Suit Action Figure is all about the blue and grey. Based on the designs of Bruce Timm, this approximately 5 1/3-inch-tall figure features the original animated look of Barbara Gordon’s masked vigilante, […]