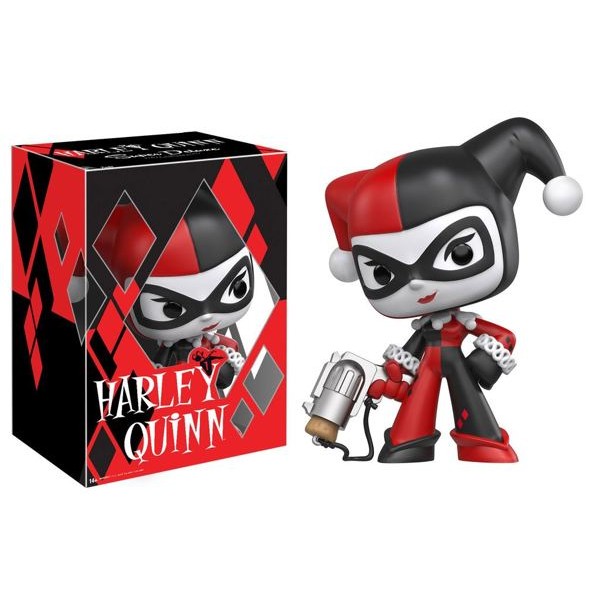 Funko, the masterminds behind the popular Pop! Vinyl figures, has decided you have too much money and the Batman Harley Quinn Super Deluxe Vinyl Figure has been created to take it.

Oh yes, Harley Quinn is a thief, which is why you’ll suddenly find yourself with less cash after meeting her… but that’s okay because you get this eye-catching vinyl figure that stands approximately 10-inches tall. Dressed in her classic harlequin outfit, the former Arkham psychiatrist is armed with her over-sized cork gun.

The Batman Harley Quinn Super Deluxe Vinyl Figure will be available November 2016 but it can be pre-ordered now for $79.99 at Entertainment Earth.

I have yet to meet a person who dislikes champagne. It’s such a special drink that you cannot even call it ‘champagne’ unless it has been produced within the lands of Champagne, France. Snooty, snooty! In addition to its sparkly appearance and good taste, we love it for being the highlight of joyous […]

The Dark Knight gets super-sized with the Batman Super Deluxe Vinyl Figure. Funko, that awesome company who brings us the awesome Pop! Vinyl figures, hits us with a new favorite with this vinyl figure that stands almost 10-inches tall. Dressed in his iconic black and […]

Batter up with the Batman: Arkham City Harley Quinn Limited Edition 1/6th Scale Statue, as Harley gets ready to hit a homerun with something that probably won’t be a baseball. Standing approximately 12-inches-tall, this 1/6th scale, highly-detailed and hand-finished statue features Harley in her Arkham […]

Harley kicks the red and black jester suit to the curb with the New 52 Harley Quinn Pop! Heroes Vinyl Figure. A lot of heroes and villains got new looks with DC Comics’ New 52 reboot, with one of the most extreme wardrobe changes being […]