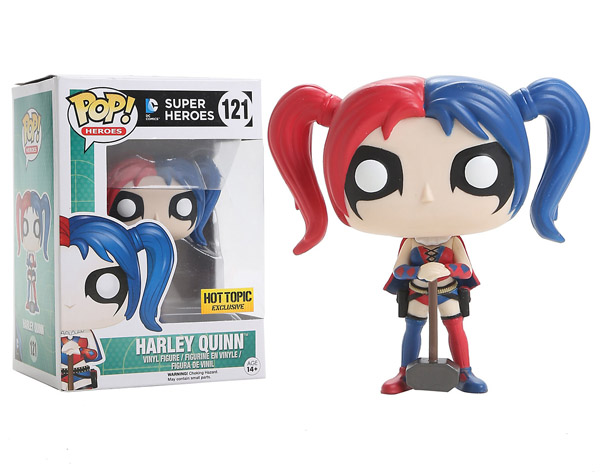 Harley kicks the red and black jester suit to the curb with the New 52 Harley Quinn Pop! Heroes Vinyl Figure.

A lot of heroes and villains got new looks with DC Comics’ New 52 reboot, with one of the most extreme wardrobe changes being done to Harley Quinn.

No longer is the Princess of Chaos covered head to toe in a harlequin outfit. Now the former girlfriend of the Joker is showing some pale skin with a corset top, shorts, and thigh-high stockings.

This 3 3/4-inch tall vinyl figure actually shows the second incarnation of New 52 Harley, when she ditched her red and black color scheme for a red and blue combo.

The Pop! Heroes The Joker (Beach) & Harley Quinn Vinyl Figure Set is ready for a tropical wedding. Will the Clown Prince of Crime and his goddess live crappily ever after? Based on the cover of Harley Quinn: Futures End #1, created by illustrator Amanda […]

Every once in a while it’s good to revamp and refresh… out with the old, in with the new. If you’re sexy and you know it, then you need a sexy stocking for the holidays to match your personality, like any of these High Heel […]

The Wonder Woman Steampunk Corset Top is for all of you Wonder Women. The front of the corset hasa double W logo with blue rhinestones over a gear. The top fabric has blue tone-on-tone stars. Get ready for the power of Wonder Woman in one […]